Each Thursday since June 2010 I have spotlighted the success of others.  I had the tables turned on me recently and was asked to answer my own questions for Girls Go Running (here).  Some of my past Thumbs Up Thursday spotlights have also asked me to answer my own questions.  With that being said, I give you Thumbs Up Thursday...runjodirun edition.

How long have you been running?

I ran with my parents when I was little. I followed that up by running all through high school. I continued running during my freshman and sophomore year of college and then I stopped because I had knee surgery and my heart just wasn’t in it anymore. I didn’t start running regularly again until February of 2009 (14 years later) and have been running ever since.

Why did you start running?
I started running again because of a very unexpected death where I work. Seven year old Stephanie Lufkin passed a way suddenly in May 2008 of complications from ITP (a rare blood platelet disorder). In February of 2009 Team Stephanie was formed and the first event was to be the 2009 Cleveland Marathon. At first I was just going to run the 10K but then I realized that my pain for 13.1 miles was only temporary and Stephanie’s family had to live with the pain of losing her for the rest of their lives! I was so incredibly proud when I crossed that finish line in memory of Stephanie and had raised over $600.00 for ITP research.

How many years have you been racing?
I started racing again in April 2009 so I have been racing for about 2 years.

What is your favorite distance to race and why?
I love the 1/2 marathon because you don’t have to run all out like you do in a 5K and I feel I can really get into a good groove around mile 7!

What is your favorite race memory?
The Last Chance for Boston 1/2 Marathon. I went to Columbus to pace my friend Dave to his first sub 2 hour 1/2 marathon. Before the race Dave turned the tables on me and said we were going to try for sub 1:50 which would be a PR for me as well as him. The course was very unique as it was 13 one mile loops plus the .1 added on at the beginning. It was the perfect course to attempt a sub 1:50 on. We were on pace for awhile and then at mile 6 we looked at each other and laughed and decided to just get Dave across the finish line under 2 hours. I was quite relieved and even said: “Thank God”. At this point I knew it was my job to go back to being the pacer. When we hit our last mile I knew we would achieve Dave’s goal. It was such an awesome feeling to not only pace Dave to a sub 2 hour 1/2 but also witness his success. Dave was so appreciative and grateful which made the experience even more amazing! So, yes my favorite race memory is of running with a friend to help him achieve sub 2 hour 1/2 marathon status!!

What is your least favorite race memory?
Without a doubt it would be the 2010 Cleveland Marathon. It was my first DNF (did not finish) ever. My race ended in an ambulance at mile 25.52. My last memory prior to waking up in the ambulance was of mile 22. I was convinced I had gone down then. After getting the bill from my ambulance ride, it hit me like a ton of bricks that I was correct in saying I knew I could see the finish line…yes, I could definitely see the finish line as it was .68 miles in front of me. 3 IV bags of fluids and a week offof work later, I slowly came to terms with it. 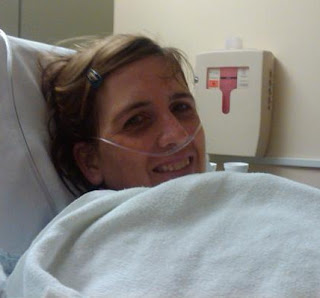 What is your proudest running moment to date?
When I answered this question recently my answer was the 2009 Columbus 1/2 Marathon. I trained incredibly hard and my ultimate goal was to run sub 2:00:00. I was still doubting my ability to successfully achieve said goal up until the race started but in the end I crossed the finish line with a PR of 1:54:14 and although I set a new, 3 minute, PR in October 2010, Columbus will always be my proudest running moment.  However, after what I went through on Sunday I now have to say that finishing the 2011 Cleveland Marathon with Dave is my proudest running moment to date.

What one item do you absolutely have to have with you on a training run?
It used to be my Ipod because I couldn’t stand to listen to my breathing but I have taught myself to run without it at times so now I would have to say it is my handheld water bottle for any run over 8 miles.

What is your favorite fuel during a race?
My DNF at Cleveland was a result of poor fueling choices before and during the race. I have since found Power Bar Gels and Power Bar Gel Blasts and they work perfectly for me!! I am forever grateful to fellow blogger, Morgan of Caution RedHead Running, for introducing me to the Power Bar Products!!

What is your favorite post race snack?
I generally can’t eat right after a race but I really enjoy pizza and bananas!

Who do you admire most and why?
My mom. Simply stated she is my hero! She never missed a track or cross country meet during my high school career which says a lot because she worked full time and she would skip her lunch break more often than not to get to the meets before the starter’s gun went off. She was and still is my biggest cheerleader! I am truly honored to be her daughter.

Do you have a favorite quote?
I have several but my current favorite is “In order to grow, we must get comfortable doing uncomfortable things”. I can relate this to all aspects of my life and it really helps with my training because let’s face it, sometimes running is simply uncomfortable!

What is your current goal?
To have a PR performance at the 2011 Columbus Marathon.  I'm trying to convince Dave to run with me again....only time will tell!!


Keep running, you're simply the best, and you inspire me!!
Posted by Jodi H at 5:00 AM