So after my less than stellar showing at The Erie Marathon in September, I did some research to see if there were any additional marathons I could run before the end of the year.  I was still wanting that sub 4 finish and felt like I had another marathon left in me.  I did secretly ask a friend her thoughts about my ability to run another marathon just a little over 6 weeks after Erie and left it at that.  Well fast forward a couple days and long story short, I ended up with a free entry to the race with the option of turning at the half marathon point if I so desired.  I liked this plan because it really became a no pressure race that very few people knew I was doing.  I truly did approach the race as a "Sunday long run" and not a race.  The bonus with this is that I had zero pre-race nerves or anxiety.  I was just out to enjoy the beautiful scenery on a lovely fall day in Ohio.  Since this was a very small marathon (52 finishers in the full), I was able to pick up my packet race morning.  As I am heading to find a spot to put my timing chip on my shoe, a woman calls out my name and of course I look at her and have to admit I have no idea who she is.  Within the first few seconds of talking with her I realized that I did in fact know her through a friend that I work with and remembered that her name was Colleen.  We chatted a bit and she asked me what my goal time was.  I told her while I would love to run a PR (who wouldn't?), I just wanted to run a smart race, listen and respond to my body and be happy with my finish.  One of my Sunday morning running buddies, Emily, was also there as her husband was running the half so I talked to her for a few minutes as well.  Colleen and I parted ways with Emily and headed outside to the start line.  As we were waiting I realized that I had forgotten to grab my sunglasses from the car and asked Colleen if she thought I had time to run and get them.  Her thought was that I didn't.  As luck would have it though, there was a small mess up with day of registrants and the start was delayed by a few minutes.  At this point, I saw Emily and I asked her if she thought I could get them and she indicated that she thought I had time.  I am happy to say that I was able to get them and return to the start line with a few minutes to spare before we were off and running.  I am so glad I chanced it because the sun was definitely present the entire 26.2 miles.  With minimal fan fare, the race started and so began my "Sunday long run".  I think a lot of people were excited as it seemed everyone went out incredibly fast, myself included.  I tried to slow myself down but it wasn't working which was evident by my 8:31 split for the first mile.  It was nice to see Emily a few times on the course as she was out cheering for her husband so I got bonus cheers from her!  I think it was around mile three or four that I came upon another runner and we started chatting.  I mentioned to her that she looked familiar and she mentioned that she was from Michigan.  It turned out that I didn't know her but we ran together until the 1/2 marathon point when she pulled away from me.  I never did catch her name.  I do know she was trying to qualify for Boston and needed a 4:10.  I do not know if she got her Boston time for sure.  All I know is that she did finish ahead of me so there is a very good chance that she did.  I was feeling very good and was glad to be able to high five Colleen as she was headed back after making the turn for the half marathon.  I can tell you that when I got to the half marathon turn, I didn't even consider it and kept on moving forward.  This was a success for me after Erie.  I wanted to leave the course after the first 1/2 at Erie!  I had taken a gel around mile 7 and it really did increase my energy.  When I got to the half marathon point on Sunday my time was 1:58.  I was feeling like I needed to take in another gel so I went ahead and took small sips of the gel throughout mile 14.  I did slow down a bit to make sure I also got an adequate amount of water with the gel.  I was definitely starting to feel the miles adding up and taking their toll on my body.  Upon getting to mile 18 my calves thought it would be fun to start locking up.  Instead of freaking out and getting upset, I slowed to a walk to get my calves to start to cooperate.  I had to do a run/walk several different times between miles 18-22.  I just went with the 3/1 ratio that seems to work for me.  I also took the time to enjoy the beauty of the trail at this point and snapped a few photos. 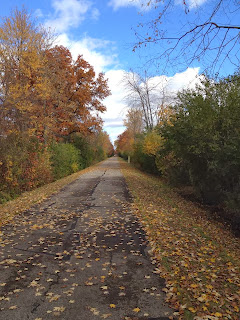 At the water stop around mile 22 I stopped because the pain in my calves was increasing.  The volunteers asked if I was okay and I mentioned that my calves were bothering me and they offered me vasoline which I found very odd.  I declined because luckily I always carry sample size biofreeze in my water belt.  I used the biofreeze and continued on my way.  Around mile 24 I came across a young man with his race number in his hand with his head down.  As I went by him he asked how I was and then I asked him the same question.  He said he was okay but he underestimated the marathon and said he should have just stuck with the half.  I ran with him for a bit and learned that he was from Toledo.  He eventually slowed to a walk and I continued on without him.  Maybe a 1/2 mile after leaving my new found Toledo friend, I came across another runner and we joined running forces so to speak.  We were both having issues with muscle cramping so we ran/walked the last part of the race together.  In the short time we were together I learned that she was from Columbus.  As we made the final turn I saw one of my good friends, that helps put on the race, and I mentioned to him that I felt like I was dying.  He said he knew but I should just hang in there because the finish was very close.  In the end I crossed the mat in 4:31:43 with a smile.  While this was by no means a PR, it was my second fastest marathon time and I finished 21 minutes faster than I did in Erie.  I really believe other than starting out too fast, I ran a smart race.  I listened and responded to my body as needed and got myself to another 26.2 finish line!  I didn't achieve my goal of a sub-4 marathon this year but I still feel that my mission was accomplished on Sunday.  I had a plan and I stuck to it and even had a great time doing it!  Oh and by the way, my Toledo friend did finish with a smile on his face! 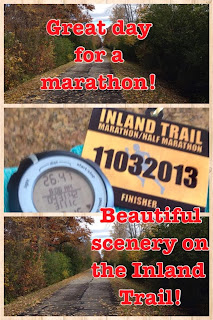 Where do I go from here?  I would like to run at least one more half before the end of the year but I will have to wait and see if it fits into schedule or not.  Also, a few weeks ago, Emily asked me if I would consider running the Cleveland full with her in May.  At this point, I am leaning a little more towards yes but I haven't made a final decision yet.  We all know my history with the Cleveland full and to be quite honest, it scares me a bit!

Keep running, you're simply the best, and you inspire me!!
Posted by Jodi H at 3:06 PM 2 comments: