In keeping with my 2012 mini running challenge of running a half marathon each month, I headed to Gross Ile, Michigan last weekend with some of my Sunday morning running partners so we could participate in the Rock CF rivers 1/2 Marathon.  Once we arrived in Michigan on Saturday we checked into our hotel, freshened up and then headed to packet pick up.  After we had everything we needed from there we made our way to the restaurant where we would be eating dinner.  We ended up arriving early so we spent some time walking around and taking some fun pictures by the water. 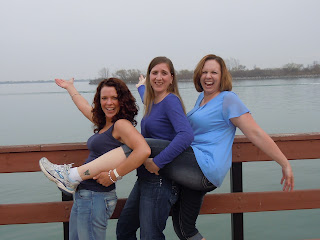 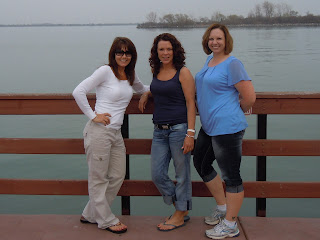 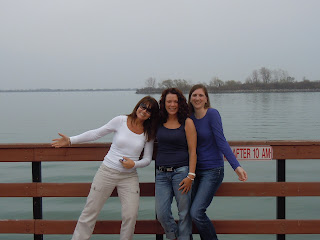 After Missi, Kim, Jenn and I finished taking pictures and checking things out we headed back to the restaurant to meet up with the rest of our party.  Kim grew up in Michigan so we planned to meet up with some of her friends for dinner.  The food and the company were absolutely fantastic which made for a great evening!  I have to say the hot fudge ice cream puff I had for dessert was divine and definitely worth every last calorie! 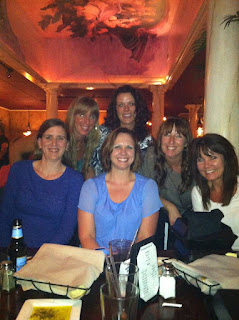 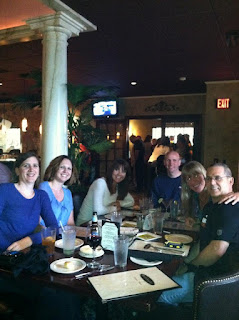 Once dinner was over, we said our goodbyes and headed back to the hotel to get some rest before our 4:45 AM alarms.

The alarm went off all to early on Sunday and I pressed snooze I few times but eventually got up and made coffee, had my usual breakfast, and got dressed for the race.  The plan was to meet in the lobby of the hotel at 6:00 AM.  We made it on time and headed out to the car when I realized I had forgotten my gels in the room so I had to quickly run back in and grab them.  At least it wasn't my Garmin that I forgot this time.  I tend to have a habit of doing that more often than I would like to admit.  I finally made it back to the car and we headed to the airport so we could take the shuttle to the race start.  The shuttle ran very quickly and efficiently and we were to the start before we knew it.  We spent some time using the restroom and taking pictures before we headed to the start line of the race.  We met numerous others during this time and every single one of them was just wonderful.  There's just something about the bond between runners that never gets old!  It often seems like you have been friends for years with the people you meet! 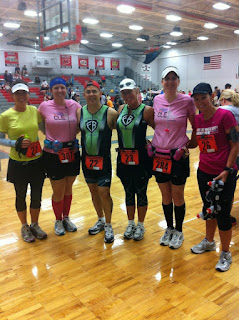 The race started right on time and my goal was to run a sub-2 again so I could make it 3 for 3 sub-2 for 2012.  We all started out together and after a few miles we were all running our own races.  It was a beautiful course with wonderful course support and great cheerleaders.  Everyone on the course was very kind and willing to chat for a few minutes during the run.  Around mile 11 or so I asked a guy that was running next to me if we were almost done.  He assured me that I was looking great and then we chatted about marathons and such and then it came up that I was in town from Cleveland and he mentioned that his friends Dave and Nell had some friends in from Cleveland.  It was a bit comical when we realized that I was one of the people that had come in to town and had dinner with Dave and Nell.  At this point we introduced ourselves to one another and I learned that his name was Jeff.  He was pretty much my running angel at that point as he basically ran the rest of the race with me!  Thanks again Jeff for pushing me to that finish line in a very respectable time of 1:53:15!!  Once I received my medal and caught my breath, Dave and I headed back out on the course to find our friends.  Before I knew it Missi was approaching and she was on pace for one heck of a PR.  I don't think she was real happy to see my at first but when she saw that she ran a 2:00:59 (over a 6 minute PR) she was very happy!!  Shortly after Missi finished Kim came flying by on the track and ran a 2:05:10 and earned herself a PR as well!!  I asked Missi if she wanted to head back out and get Jenn and she said no thanks.  I completely understood and set out to find Jenn.  It wasn't too long before I found her and I ran her the rest of the way in.  She ran a very respectable race and was quite happy to finish right in the middle of her goal time.  We took the obligatory post-race pictures of course and then headed back to the hotel to clean up and head home. 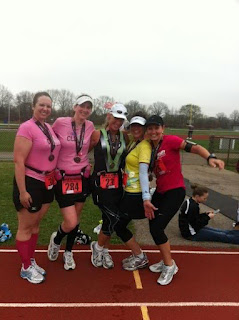 Overall, it was a great quick weekend with the Sunday morning long run girls.  We were all very impressed with the organization of the event and we will return!

Final February Challenge Check In and A March Challenge

In the end I am very pleased with my successful challenge.  An added bonus to sticking to my February challenge was losing 5.4 pounds.  I definitely can't argue that!


So what does March have in store for me?  Well, I'm going to take a shot at this challenge! 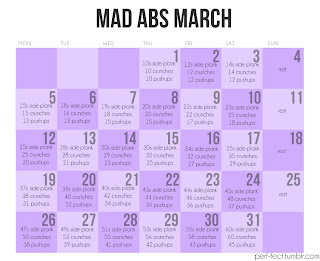 Who wants to join me this month?