If you have been following my blog for awhile, you are quite aware that myself and two friends have a goal of completing a 1/2 marathon in all 50 states.  We decided we should also throw our National's Capital into the mix and that is how we came to run the Rock 'n' Roll USA 1/2 in Washington, D.C. this past weekend.

Thursday
Nikki and I took an evening flight into D.C. where Deb was waiting at the airport for us to arrive.  Once we shared hugs and said our hellos, we headed for the Metro so we could take it to our hotel.  After arriving at our hotel, we settled into our room and talked for awhile before calling it a night and getting some shut eye.

Friday
We all decided to sleep in a bit on Friday since we were without our children.  Of course I woke up around 6:30 the first time and did make a phone call home to be sure my kids were up and getting ready for school.  The funny thing is the clock in our hotel room hadn't been "sprung" forward so when we finally got moving we realized it was actually almost 10:00 and not 9:00 as we had originallly thought.  Deb and I quickly headed downstairs to get some breakfast while Nikki decided to stay in the room and just have a Luna Bar for breakfast.  While we were at breakfast, Deb and I went ahead and grabbed some bagels, bananas, and peanut butter for race morning.  Once we were back in the room we decided to look at possible D.C. bus tours.  We found one that we felt would be the best deal and used the business center in the hotel to order our tickets.  We opted for the two day pass since there was a significant discount given for doing so.  Once we all had our tickets printed, we headed to the Metro in order to head to the race expo to pick up our packets.  We spent some time looking at the different vendors, made a few purchases, and stopped to have our picture taken quickly. 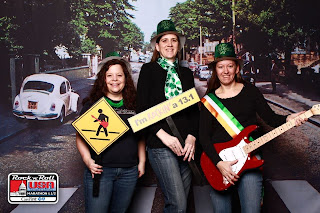 We left the expo and headed to Old Ebbitt's for lunch.  I enjoyed some fantastic fish and chips and of course had to have a bite of Deb's crab cakes.  The food was delicious!  After eating we stopped at the hotel quickly and then headed out to take advantage of day 1 of our bus tour.  We enjoyed riding on the bus and listening to the history of Washington, D.C.  We decided to go ahead and get off the bus and do some sightseeing.

After we finished checking out the sights, we stopped and grabbed some water and other drinks for race morning and then we headed back to our hotel to relax a bit before our dinner reservations.  We headed to Bobby Van's for dinner and it did not disappoint.  Thankfully we had asked the server how large the steak was prior to ordering as it was 16 ounces.  That would have been a heck of a lot of food if each of us ordered our own steak.  We decided to split the steak and also ordered a side of mashed potatoes to split.  It was the perfect amount of food and it left us with room for dessert.  Of course we all ordered our own desserts and shared....don't judge!  While we were having dinner we met another runner.  He was planning to run the full marathon on Saturday.  Upon talking to him, we found out that he has run a marathon in all 50 states plus D.C. twice and is working on his third time through.  His ultimate goal is to do this 5 times.  He was very kind and we really enjoyed talking with him.  He has quite an interesting story.  You can read about it here.  After dinner we headed back to the hotel to ge things ready for our early morning wake up call.

Saturday
The alarm went off around 6:15 AM and I was up making coffee and eating my pre-race breakfast.  Fortunately we stayed in a hotel that was relatively close to the start line so we were able to take our time.  Once everyone was ready we stopped in the lobby for a quick picture and then headed out for the start line.

On the way I needed to use the restroom for the 100th time so we ducked into one of the buildings.  Of course we had to show our ID and send our personal belongings through the xray.  It was worth the short delay to be able to use clean, line-free bathrooms.  Eventually we made it to my corral and I shared good luck hugs with Deb and Nikki and then we parted ways.  My goal for this race was to run sub 1:50 so I knew I had to stay around an 8:23 pace to do so.  My first mile came in perfectly at 8:24.  I would continue to run very well through mile 6 (8:08, 8:04, 8:10, 8:21, 8:12).  During the course of mile 5, I was talking with a few other runners and knew there would be a hill coming but I was not expecting it to be so steep.  In fact as I rounded the corner and saw the "mountain" in front of me I few inappropriate words came flying out of my mouth.  I did my best to make it to the top of the hill in a timely manner but my pace was seriously compromised as I hit mile 7 with a 9:02.  I did look at my Garmin stats after the race and don't you know there was a 262 ft incline for that hill...ouch!!  I was able to find my groove again pace wise relatively quickly and miles 8-11 went pretty well with a few small rolling hills but nothing that threw me off pace again like that mile 7 hill (8:10, 8:18, 8:06, 8:17).  Of course I was greeted by yet another hill at mile 12.  At this point I got angry with the hill and did my best to get up it without dropping my pace.  I didn't quite maintain my pace but I did make it up this hill in a more timely manner than mile 7's hill (8:39).  I knew at this point my goal time was slowly slipping away so I picked up the pace as best I could for mile 13 (8:16).  A spectator mentioned that it was all down hill to the finish and I thought okay, I can handle this.  Well I am not exactly sure what his definition of downhill is but the course did go back up for the last bit of the race.  I tried in vain to make it to the finish mat under 1:50.  I missed my goal by a mere 43 seconds and ran the final .1 (.31 according to my Garmin) in 2:31 which was an 8:14 pace.  Even though my final time didn't have a 1:4X:XX in it, I was very happy with my 1:50:42.  I ran a very smart race and I know for a fact if it hadn't been for those hills I would have crushed my goal.

After finishing, I grabbed my medal, some water, and a chocolate milk and then talked with other runners while waiting for Nikki and Deb to make it to the finish line.  While I was waiting, I met a woman who told me she had cheated because she turned off at the half marathon and she was supposed to run the full.  I told her it wasn't cheating, it was just listening to her body.  She was disappointed though as this was supposed to be her 97th marathon and she had to call it quits at 13.1 because she was sick.  Mind you she had just run a marathon the weekend prior.  She's definitely an inspiration.  Once Deb and Nikki both finished we headed to the Metro station so we could go back to the hotel and shower.  On our way back we stopped and grabbed some Starbucks which really hit the spot.  We made it back to the hotel, showered, and then headed to Pot Belly's to grab a sandwich before doing more sightseeing.  Our plan was to ride the Metro to Arlington and then use day 2 of our bus tour to see the rest of D.C. and get back to our hotel.  Upon arriving at Arlington, Deb looked up the gravesite of a friend of hers that is buried there.  We stopped in the gift shop so she could buy flags to leave at the gravesite.  I thought I was done with hills after the race but let me tell you Arlington is incredibly hilly and we did a lot of walking in there.  We did eventually find the site Deb was looking for and then we decided to wait and watch the changing of the guards at the Tomb of the Unknown Soldiers.  Of course by this time it was pouring rain so we did our best to stay dry while we waited. 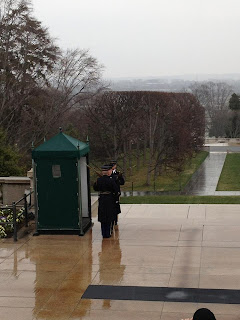 After we watched the ceremony we headed to the front of Arlington to catch our bus.  Imagine our surprise when we eventually found out that the bus didn't run at all on Saturday due to road closures until 3:00 PM as a result of the marathon.  Nikki called the company to find all of this out and explained that we were unable to use day 2 of our pass as a result.  She was told to request a refund on the website which we all did.  We did get a prompt response that indicated we would be receiving a refund.  We will see how quickly that takes place.  We decided to just go ahead and take a cab to D.C. Cupcakes in Georgetown.  The line wasn't too crazy and we chatted with other people and made dinner reservations while we were in line. 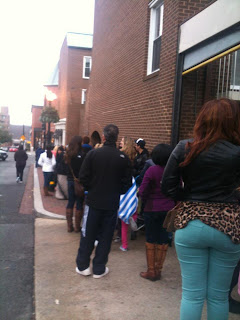 Once we got inside we all bought some cupcakes to take home.  As we made our way to J. Paul's for dinner we did have to stop in the Athleta store and look around.  I would have loved to have one of everything.  Once again I had fish and chips for dinner and it was quite delicious.  We enjoyed a nice, relaxing dinner and had a few drinks before taking a cab back to our hotel.  Once back to the hotel we started packing for our return home on Sunday afternoon.

Sunday
We slept in a bit, got ready, and headed out to grab some breakfast before heading to the airport.  Deb's flight left an hour before ours so we said our goodbyes and then just relaxed at the airport until our flight.  I am pretty sure I slept the entire flight home and it felt great.  When we got to the airport I ran into my friend Melissa.  What are the odds that we would be flying on the same airline and arriving at the airport at the same time.  It worked out well though because she ended up needing a ride home.

All in all, it was another great girls weekend with a little 13.1 thrown in.  It was the first time I had ever been to Washington, D.C. and I really enjoyed it.

Complete a half  in all 50 states status:  11 states and D.C. completed

Up next:  State #12 in Indianapolis, Indiana (Mini Marathon)