Preparing for the official training to begin!

Well, Sunday will be day one of my official training schedule for the Cleveland Marathon. After watching the weather report last night for the next several days, I am thankful that my treadmill was delivered yesterday and that my elliptical is being delivered in the next hour. I have a feeling I will be doing a lot of my training for the marathon on said equipment. I made the mistake of running outside every single day (except one) last year while I was training for the Cleveland 1/2 Marathon. Of course running outside in the winter involved ice and in turn landed me with an injury that had me down for the count for two weeks (one of those weeks being on crutches). I ran 4 miles on the treadmill yesterday and it felt great. Thankfully there is a TV mounted on the wall in the basement or I may have been incredibly bored. Given the choice, I prefer to run outside but I will do what I need to do to stay healthy and injury free and if that means working out inside then so be it.
As I have mentioned before, I will be running the marathon in honor of my dear friend, Deb. The weekend of the marathon it will be ten years since she had a brain tumor removed. We are forming a team to raise money and awareness for brain tumor treatment and research in her name. Once I have the information about our team, I will post it on my blog so that others who are interested may join the team or make a donation!

I am continually amazed at the love I have found for running again! As of December 24, 2009, I have lost 40 pounds! 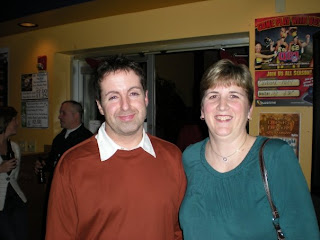 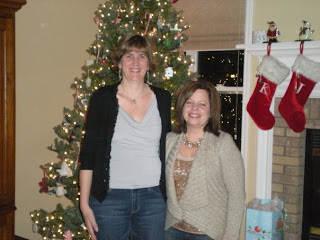 Who needs a stairclimber?

I ended up with a cold after last week's 5K. I didn't run at all until Thursday. I ran 4 1/2 miles on my friend Deb's treadmill. Last weekend Deb and I were looking ahead for races we could run in the coming months while we train for the Cleveland Marathon. We came across a tower climb. Upon further review, we learned that the tower climb involves running up 37 flights (646 steps) at the Galleria Mall in Cleveland. I decided to run my steps (15) at home today for my work out. I certainly need training for "Tackle the Tower". I was sweating buckets after 35 minutes on my steps and I can guarantee I was nowhere near running 646 steps.

This workout got me thinking, there are so many ways to workout using things around the house. This workout also made me realize that I seriousoly need to purchase a treadmill and maybe an elliptical too! So, what kind of winter workouts do you do?
Posted by Jodi H at 4:27 PM No comments:

A jingling good time at the Reindeer Run 5K

Headed out to run a local 5k this morning with Brenda and Deb. When we all met at my house the temperature was around 30 degrees. Off we headed to Lakewood Park. Upon arriving, we were given jingle bells to put on our shoes, afterall it was a reindeer run. Among the many bell wearers, there was Elf, Mrs. Claus, and a few reindeer running the event with us. They all looked great and were certainly there for a good time!

As mentioned in my previous post, my goals were two-fold, placing in my age group and breaking 24:30. I ended up with 5th in my age group, but I ran another PR. Chip time: 24:08.45. I was passed by number 4 in my age group with less than .1 miles left. I did however outsprint a guy that had been running with us the whole way so that did boost my ego a little bit. Not sure what it did for his though...sorry buddy.

I also had a new playlist for today's race. The songs that motivated me today during the race and while cooling down included the following list.

I have to say this has been the best play list I have run to so far.


Brenda, Deb and I pre-race (taken by Kaelynn age 7) 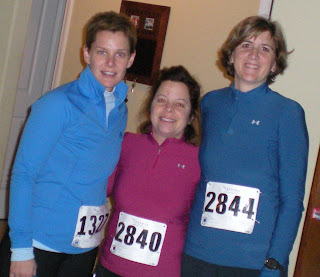 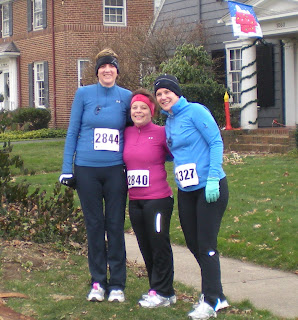