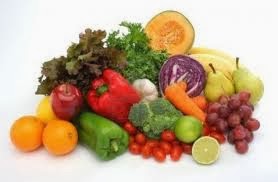 Mission #2: Accept and embrace that my best is good enough.
Action Plan: Stop comparing myself to others and compare myself to the person I was yesterday.
Action Plan: Define my own success and measure it by what I am able to do.
Mission #2 has really come a long way this month.  It's me against myself and no one else.  I strive to be a better me every single day and I feel that I have been doing a much better job of this as of late.  After all, life is what you make it so why not make the best of it. 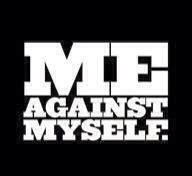 Mission #3: Run 1400 miles in 2014.
Action Plan: Run.
Action Plan: Run some more.
Mission #3 is still going well.  I fell just shy of 100 miles this month as I happily walked a good portion of my 1/2 marathon last weekend.  96.1 miles run in March (1071.96 miles to go).
Mission #4: Run happy.
Action Plan: Run training runs and races with friends as often as I can.
Action Plan: Listen to my heart and not the beeps on my Garmin.
Action Plan: Be thankful that I have been blessed with a healthy body that allows me to run.
Mission #4 is spot on.  I am enjoying my workouts with my friends.  I loved walk/running my most recent 1/2 marathon with my best friend, Deb.  It was so enjoyable to have a nice chunk of time to catch up since we live in different states now.
Mission #5: Do other workouts in addition to running.
Action Plan: Find workouts I enjoy and actually do them.
Action Plan: Participate in some monthly fitness challenges.
Mission #5 is going fantastic!   In April I walked 13.02 miles, (outside and treadmill), did 3 upper body weight fitness workouts, 1 leg weight fitness workout, and one kettlebell workout.  I also completed the 30 day fitness challenge below.  I did 3 sets of each exercise each day so in the end I did 708 tricep dips, 657 push ups, and 1,203 mountain climbers.  I am looking forward to a kettlebell swing challenge in May! 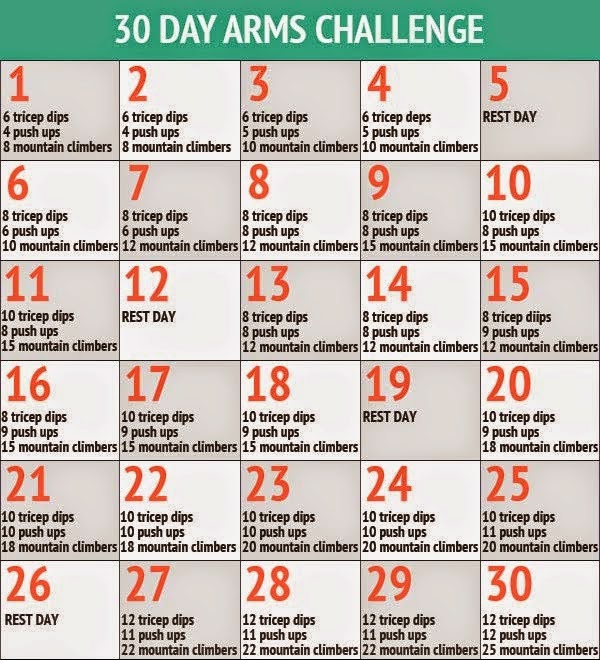 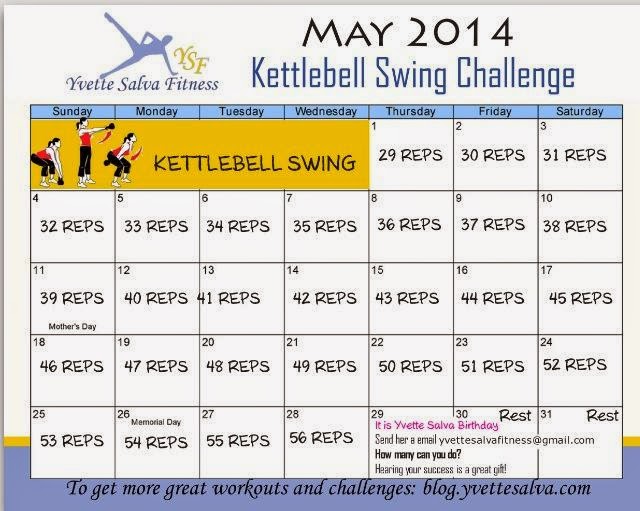 Overall I am very pleased with April!  I can't believe I will be joining the Emilys and Mellisa in just 3 short weeks at the start line of the Cleveland Marathon to push a participant that suffers from ALS.  More to come about this amazing opportunity in a future post.

Keep running, you're simply the best, and you inspire me!!
Posted by Jodi H at 6:14 PM 3 comments:

After running our Florida 1/2 marathon in February Deb, Nikki, and I did some research to decide what would be next on our list of 50 states.  I mentioned that travel would work well for me this past weekend as I was on Spring Break and I wouldn't have to worry about getting time off.  Deb did some searching and she shared that the Garmin Wickedly Fast 1/2 Marathon was taking place during the time frame we were looking at.  I had seen that Kim was going to be running this race so I messaged her and let her know that we were considering it.  Deb did some more research and was able to find flights at a reasonable cost.  The cool thing was that Nikki and I would leave Cleveland and stop in Chicago and pick up Deb.  This was the first time since Deb moved to Chicago that we would be on the same flight which was really nice.  Once we figured this out we went ahead and registered for the race.  Fast forward to last Monday as I am watching the Boston Marathon.  After I am done screaming at my Ipad screen and watch Meb win I receive a text from Kim letting me know that Meb is the speaker at the pasta dinner and she and Elizabeth would be attending.  She was just checking to see if we would be interested in joining them.  I quickly texted Deb and Nikki and a few minutes later I purchased the tickets.  We flew into Missouri on Friday afternoon and picked up our rental car.  Nikki works for Ford so she decided to spend the afternoon at the Ford plant.  Deb and I opted to go shopping instead.  After shopping and a light snack, Deb and I headed to Kansas to check into our hotel and then headed out for the packet pickup.  The expo was in a hotel which also would be the location for the pasta dinner so that was great.  Kim and Elizabeth had found us seats at the dinner and after we got our packets we went upstairs and sat at the table so they could go downstairs and shop.  The expo was quite tiny so they were only gone for a few minutes.
When Meb was introduced and walked to the podium, he received a standing ovation.  It was great to hear his story.  I had no idea of his background and the challenges he faced.  It was an inspirational and emotion speech and I am so very thankful to Kim for suggesting that we attend!  After Meb spoke he was taking the time to sign bibs and shirts and pose for photo ops.  Kim and Elizabeth were done before we were so we made a plan to text when we got to the start line the next morning so we could take some pictures.  As we were waiting in line, Deb and I decided we were going to have Meb sign our shirts.  Nikki opted for her bib.

After we met Meb, we stopped off at Target to get some things for race morning.  I slept well and everything went smoothly in the morning.  Kim was kind enough to text me to let me know that they had parked in the high school parking lot.  Great idea!  Another thank you to Kim!  We got to the high school with no problem and then headed toward the start line to meet up with Kim and Elizabeth.  I had turned on my Garmin right as I got out of the car because it usually takes a long time to find a satellite.  Well not this time, my satellite was there almost instantly.  I am guessing it was because we were at Garmin's Headquarters.  We found Kim and Elizabeth and posed for photos and talked about our plans for the run.  Earlier in the week Deb had asked me if I would be willing to run/walk the race with her as she was going through some things and wanted to have company during the 13.1 mile journey.  So when asked what the plan was, I hugged Deb and said I would be walk/running with her.


There was very little fanfare.  The singing of the National Anthem took place and then we were off.  Things were going just fine and Deb and I were walking 10 minutes then running for 1 minute.  In full disclosure, there were a few times when I would get her to run for 1 1/2 to 2 minutes.  I think she may have been catching on and counting in her head though as sometimes durnig the run portion she would stop after a minute.  As we passed some police officers they said to get ready for the weather.  I thanked them and said that a little water wouldn't hurt.  Yeah, famous last words....about 20 minutes later the rain started coming.  Then the wind picked up and then wouldn't you know that it started hailing!  Kansas was living up to its "tornado alley" name and even gave us several strikes of lightning.  Eventually the rain went away but we were left to deal with the huge puddles that were on the trail portion of the race.


I believe I texted Kim to see how she had done right after "swimming through" this tunnel.  I was happy to hear that Elizabeth had paced her to a sub 2 hour finish.  Unfortunately we didn't get to see Kim and Elizabeth before they left but I am sure we will run into them in future states.  Shortly after this, Nikki sent me a text to let me know she had finished and she was going to wait in the car.  Deb and I just kept moving towards the finish.  After what seemed like an eternity, we could see the yellow brick road and knew the finish was in sight.  We finished in 3:37 and I'm pretty sure the rain really slowed us down in the second half but I loved spending 13.1 miles with my best friend and I wouldn't change it for the world, well maybe the weather but we can't control that.


We collected our medals and headed back to the hotel for showers. 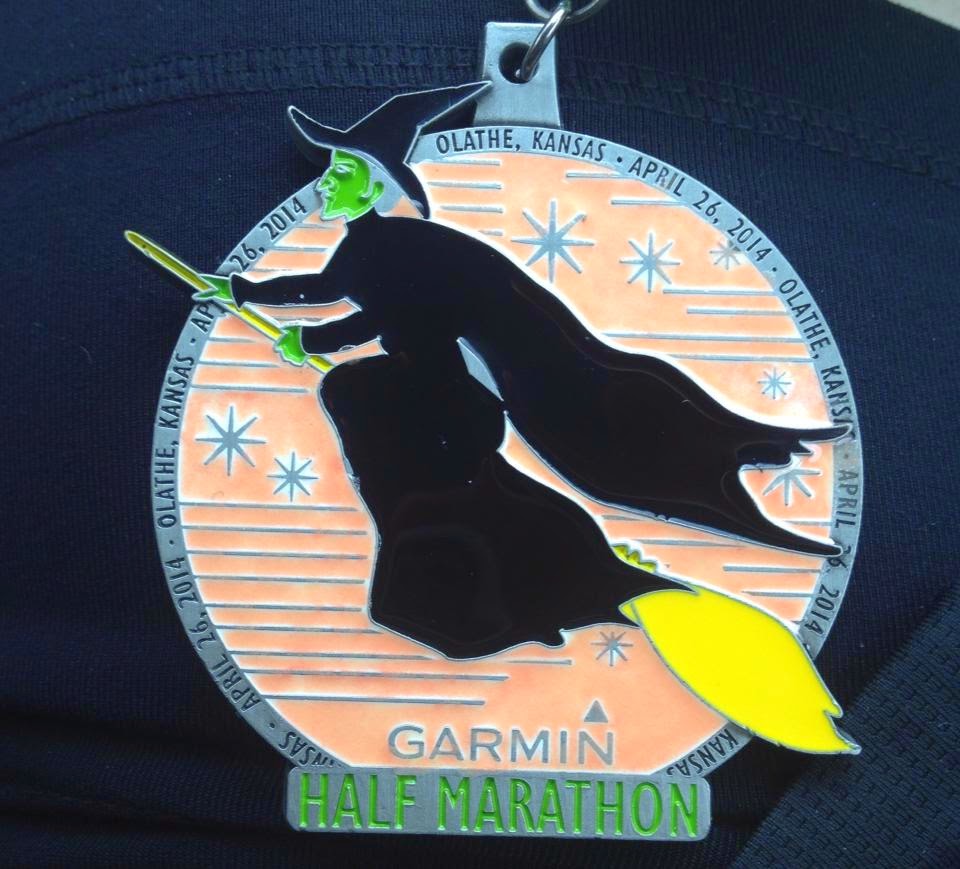 Once everyone was ready we enjoyed some great Kansas bbq.  We all tried burnt ends for the first time.  They were great!  After lunch we headed back to the hotel and took a nap, checked into our flight for Sunday morning and then went out and had a light dinner of drinks, salads, and dessert.

Sunday morning we headed back to Missouri to catch our flight home.  We landed in Chicago and said our goodbyes to Deb and then Nikki and I grabbed some lunch during our layover before we headed back to Cleveland.

Although the weather was less than pleasant, we had a great time.  It was also great seeing Kim again and getting to know Elizabeth.  Runners are the nicest people you will ever meet!

Complete a half in all 50 states status: 14 states and D.C. completed

I am not sure what state will be next but I will keep you posted!  It will probably be sometime this fall.

Keep running, you're simple the best, and you inspire me!!
﻿﻿

Sunday's pre-dawn 16 mile run brought my March training to a close.  I am truly hoping that Sunday was the end of this crazy snow!

Mission #2: Accept and embrace that my best is good enough.
Action Plan: Stop comparing myself to others and compare myself to the person I was yesterday.
Action Plan: Define my own success and measure it by what I am able to do.
Mission #2 continues to challenge me but I am really working hard on it and feel I am moving in the right direction during my workouts.  I do what I can do and have been happy with it at the end of the day so I say that is a success.  I also  just finished reading "Raising an Athlete".  It was a great book and incredibly helpful with this mission.  I highly recommend reading it.

Overall, I am absolutely thrilled with the way March ended up and am looking forward to seeing what April brings.

Keep running, you're simply the best, and you inspire me!!
Posted by Jodi H at 5:52 PM 2 comments: