2012 "to do list" May check-in
2012 Running Goals
1. My number one running goal is to run a sub-1:50 half marathon
-I seriously considered attempting this at the Cleveland 1/2 but I didn't even attempt it when it was already 71 degrees at the start line.
2. Secondary to the goal of a sub-1:50, I would like to attempt to run another marathon PR (sub-4:10:11) with a stretch goal of running a sub-4:00:00
-I have thought a little bit about this one this month.  I need to figure out where and when we are running our next 1/2 so I can see if a marathon will fit into my schedule this year.
2012 Mini Running Challenges
1. Run 100 miles per month
-49.49 miles run in May- a far cry from 100.  It was a very busy month that ended with a cold that has had me sidelined this entire week.  There's always next month.
2. Run a half marathon each month
-Rite Aid Cleveland 1/2 Marathon (2:06:17)-  This is the first 1/2 that I didn't break two hours at this year.  I ran a smart race and I own every single second of that time with pride.  The added bonus is that I finally conquered my Cleveland demons!!
2012 Non-Running Mini Challenges
1. Increase the amount of cross-training/strength training I do on a monthly basis
-0 cross training/strength training workouts done in May- huge fail on my part.  Just like last month, I really have no excuse, I just simply didn't do it.
2. Focus on choosing and cooking healthier foods
-7 well-balanced meals prepared in May- not too bad considering May was one crazy busy month!
3. Drink more water
-I am happy to report I was right on track with this in May.
4. I promised a certain someone that if they ran a marathon with me I would learn to swim so I intend to make good on that promise this year.
-I did think about when I could fit in swim lessons.  I just need to follow through and make a phone call and set them up!

Even though May was a crazy busy month, I am still happy that I ran 49.49 miles and finally conquered my Cleveland demons.  Afterall, 49.49 miles are better than 0!!  Let's see what June has in store!!
Keep running, you're simply the best, and you inspire me!!
Posted by Jodi H at 9:45 PM 2 comments:

Race morning came early as it always does.  When we got to Brown's Stadium around 6:30 or so it was already 71 degrees.  It was nice to use the restrooms inside the stadium instead of port-a-potties for once.  After using the restroom we all headed to the start line where I saw my friends Bill and Kristin and gave them both hugs and wished them luck.  After I said my hellos we took a few pictures.


﻿As we were standing at the start line, talking with Dave who had come downtown to support us during the race, we decided we were going to try and run a sub-2.  During this discussion Jenn was trying to make her way to us as she wanted to run with Kim.  Eventually Jenn caught up with us and shortly after that the race started.  My plan was to run with the girls and run by feel.  The start of the race is straight uphill and we were all feeling it.  I was quite happy with our 9:33 for the first mile.  Once we had the first mile behind us I settled into a good pace and we were all running together.  I would check in with the girls every so often to be sure everyone was doing okay.  The next 8 miles we ran between 8:35 and 9:34.  The sun was beating down on us and I was definitely feeling it.  I had started dumping water on my head and down my back around mile 6 to try and keep my body temperature down.  I was still doing okay until we hit a crazy hill at mile 10.  I knew once we hit that hill I needed to slow it down and run smart due to the heat and lack of breeze not to mention the fact that I had witnessed several people passed out and ambulances on the course at this point.  I made the decision to walk the hill at mile 10 and I am glad I did.  Even with walking the hill my mile split was under a 10 minute mile.  At this point I had no idea if anyone was still running near me.  I had lost all sight of everyone.  During mile 11 I did a 3/1 run/walk and managed to pull of a 10:11 mile.  Mile 12 was my slowest mile all day at 10:57, but I am totally fine with it because I did stop to walk with a girl that looked as if she may go down.  I gave her some of my water and she seemed to be doing better so I continued on.  At the last water stop around mile 12.5 I grabbed two glasses of water as I had been doing since mile 6.  I would dump one on my head and one down my back.  However at this particular water stop they ran out of water and the girl next to me had a full marathon bib on so I told her to go ahead and take both of my cups of water as she had a long way to go.  I figured I could walk to the finish line if I had to.  She was very appreciative and thanked me.  I was more than happy to do it as she needed that water much more than I did at that point.  She went on her way for the full and I continued on towards the finish line.  As I was approaching the stadium I came upon a girl that was walking and told her she could do it because we were almost there.  She started running with me and the next thing I knew she was long gone.  I just ran a steady pace to the finish line.  She had to be running fast because I ran mile 13 in 9:21.  I vividly remember the final tenth of a mile because I realized I hadn't been affected by Cleveland event demons past one single time.  I was in fact finishing the Cleveland 1/2 Marathon with a smile on my face with an official time of 2:06:17.  I say "take THAT Cleveland!"  I noticed Missi in the finisher's chute right in front of me so the two of us waited for everyone else to finish.  I wasn't feeling the greatest so I downed a bottle of water, a chocolate milk, and a banana.  I slowly started feeling better once I had a chance to sit down.  After everyone was done we talked a bit more and had some pictures taken.


In the end I was actually incredibly happy with my 2:06 finish in Sunday's conditions.  The best part is that I didn't experience any demons of Cleveland past! Oh and my time was actually a PR for the Cleveland 1/2 course so I will take it.

Will I ever run another event at the Cleveland Marathon again?  Well all I can say is never say never....

Oh and for those that read my post prior to the 1/2, I did not meet my secret goal.  In fact based on the temperature at the start line I didn't even try!!

Keep running, you're simply the best, and you inspire me!!
Posted by Jodi H at 2:55 PM 1 comment:

Remember last year in this post when I said I would never run another event at the Cleveland Marathon?  Well, I should never say never because I just received the following email.

Dear Jodi:
Please take a minute to read these final instructions for the 35th Annual Rite Aid Cleveland Marathon, Half Marathon, 10K and the Rite Aid Cleveland 5K presented by the Organization for Autism Research. Our website, www.clevelandmarathon.com , is also a great resource for the most up-to-date event information.


Your bib number is 12546. You are registered for the Half Marathon.

See the Cleveland 1/2 Marathon was the first half I ran after returning to running in 2009 and I finished issue free with a smile on my face so I decided I would return to Cleveland for my May 1/2 marathon. 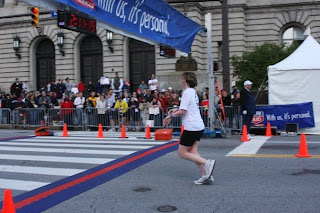 As many of you know my 2010 Cleveland Marathon experience ended in an ambulance. 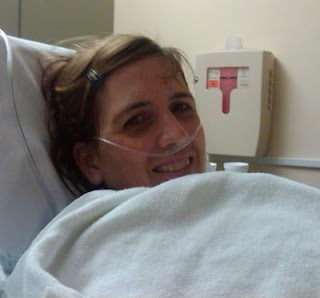 Followed by my 2011 Cleveland experience ending at the finish line after almost 6 hours filled with anxiety attacks and frustration.  To this day, I stand by the statement that I would not have finished the race if Dave hadn't been with me every step of the way.  I am forever grateful for his support that day. 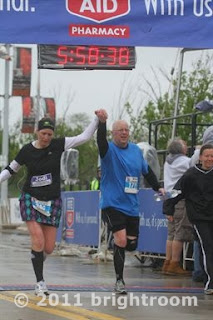 I do have a secret goal for this Sunday's half marathon but that goal is between me and my running shoes.  I will let you know how it turns out!!

Keep running, you're simply the best, and you inspire me!!
Posted by Jodi H at 3:21 PM 4 comments:

I seriously can't believe it is May 1 already.  Where did the time go?  Before we know it we will be wrapping up another school year and I will be enjoying my summer off.  The start of a new month also means another month in review is in order.

2012 "to do list" April check-in
2012 Running Goals
1. My number one running goal is to run a sub-1:50 half marathon
-I attempted this at Louisville over the weekend but had to back off at mile 10 due to a hamstring twinge.  We will see what happens over the next few months in regards to this goal.
2. Secondary to the goal of a sub-1:50, I would like to attempt to run another marathon PR (sub-4:10:11) with a stretch goal of running a sub-4:00:00
-I haven't really thought too much about this one lately

2012 Mini Running Challenges
1. Run 100 miles per month
-95.3 miles run in April- Less than 5 miles shy this month but I am trying to listen to my body and my heel basically screamed at me yesterday when I even considered hitting the treadmill for those final miles.  I still have a slight ache in the heel so I will probably take today off as well and hope for the best tomorrow.
2. Run a half marathon each month
-Kentucky Derby Mini Marathon (1:53:47)
2012 Non-Running Mini Challenges
1. Increase the amount of cross-training/strength training I do on a monthly basis
-0 cross training/strength training workouts done in April- huge fail on my part.  I even watched a core video with the intention of doing the workout a few times a week in April.  I really have no excuse, I just simply didn't do it.
2. Focus on choosing and cooking healthier foods
-8 well-balanced meals prepared in April- not too bad considering there was Spring Break and Easter thrown in there.
3. Drink more water
-I continued on the right track with this one for April.
4. I promised a certain someone that if they ran a marathon with me I would learn to swim so I intend to make good on that promise this year.
-There was some discussion in regards to this one as my mom pointed out that I can tread water, float on my back, and swim a bit like a frog.  I think my problem is that I don't know how to breathe properly and I don't like getting water up my nose so I need to take lessons to fix this.

April was another great month running weather wise!!  Although I fell short of 100 miles, April ended on a great note with our trip to Louisville to knock another state off our quest to run a 1/2 in all 50 states.  9 states down, 41 to go.  Looking foward to deciding which state we are going to conquer next!
Keep running, you're simply the best, and you inspire me!!
Posted by Jodi H at 5:07 PM 2 comments: