This past weekend found Deb, Nikki, and I in Minnesota to knock another state off the list in our quest to run a 1/2 marathon in all 50 states.  We flew in Friday afternoon and headed straight to the Mall of America where I reluctantly agreed to ride the Fairly Odd Coaster.  Apparantely I provided great entertainment for Deb and Nikki based on my reactions during the ride.
After riding the coaster,doing some shopping, and getting pampered at the nail salon, we headed to the Expo to pick up our packets.  This was a very small race so the expo was just some folding tables and wheels for rollerblades (there was a 1/2 marathon rollerblade race as well) which was fine because we were able to get in and out in just a few minutes.  With race packets in hand we headed to check into our hotel.  After freshening up we headed out for dinner, followed by a drink and then it was back to the hotel to get some sleep.  With the time change and the later race start we knew we would be able to sleep longer than we usually can for a race which was a nice benefit.

Race morning we got everything together and stopped for some breakfast to eat in the car on the way to the start line.  We made it to the start line with plenty of time to spare where we observed the rollerbladers getting ready and got our picture taken before it was time to go.


Within the first half mile of the race my stomach was talking to me so I decided it best to wait in the port-o-potty line before continuing on in the race.  Sadly my stomach would continue to talk to me throughout most of the race but it is what it is and sometimes you have an off day.  The course was an out and back so we were able to see other runners several times during the course of the race.  We were also able to see the rollerbladers which was incredibly interesting to me.  I can't even imagine how hard it was to blade up those hills because I know how hard it was to run up them!  I was very thankful for the course when I was able to see Deb and Nikki when the going was getting tough.  Deb even mentioned that when she saw me at mile eleven I wasn't looking so good.  Yeah, I wasn't feeling so good either!  I crossed the line in 2:14 feeling less than stellar.  I waited for Nikki to finish and then we headed back out on the course to get Deb.  We met her just past the 12 mile mark and finished the race with her.  It was really nice to be able to do that.  We also encouraged a young girl who was running her first 1/2 marathon.  She said she was praying for strength and then we came along.  I would say we were supposed to be there as I firmly believe everything happens for a reason.  After Deb finished we waited for the last people to finish the race.  It was an older couple participating in their 19th state.  Deb said she had talked to them on the course and they had wanted to quit but they didn't....very impressive!!  After all was said and done we headed back to the hotel to shower and then headed to Hell's Kitchen for brunch!  We were all very hungry and the food and atmosphere was very good although I still want to know why our server was wearing her pajamas!!  Feeling much better after eating we headed back to our hotel to rest for the afternoon.  Saturday evening we headed out to Bar La Grassa for a fantastic dinner and great conversation as usual.  After dinner we got everything ready for our flight home early Sunday morning and headed to bed.

As always it was a wonderful girl's running weekend with some great food, lots of laughs, and 13.1 miles sprinkled in!

2012 "to do list" July check-in
2012 Running Goals
1. My number one running goal is to run a sub-1:50 half marathon
-I didn't even attempt this goal in July. I really need to come up with a plan and commit to achieving this goal soon.
2. Secondary to the goal of a sub-1:50, I would like to attempt to run another marathon PR (sub-4:10:11) with a stretch goal of running a sub-4:00:00
-I have come to the decision that I am not going to run a full marathon this year. With a goal of running a 1/2 marathon every month this year, I think it would be a bad idea to train for a full at the risk of getting injured.

2012 Mini Running Challenges
1. Run 100 miles per month
-68.37 miles run in July- I got a little closer this month than in previous months.  I am still okay with this and  I continue to run just to enjoy it right now.
2. Run a half marathon each month
-Presque Isle 1/2 Marathon (2:10:20)- My July 1/2 marathon fell right during the anniversary of my Uncle Joe's passing.  I ran all 13.1 miles for him and then headed into the water and reflected on what an amazing person he was. 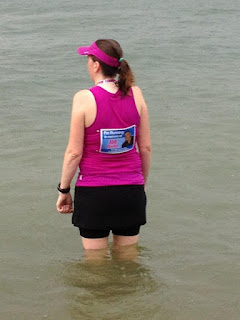 2012 Non-Running Mini Challenges
1. Increase the amount of cross-training/strength training I do on a monthly basis
-3 cross training/strength training workouts done in July- One 6.5 mile bike ride and two 45 minute pool workouts.  I decided to take advantage of taking the kids to the pool to get in some cross training!!
2. Focus on choosing and cooking healthier foods
-7 well-balanced meals prepared in July- This was definitely not very good.  My weight gain would indicate that I ate out a lot and didn't make the best choices.  Oh well, there's always August.
3. Drink more water
-I conitnue to be successful in this area.
4. I promised a certain someone that if they ran a marathon with me I would learn to swim so I intend to make good on that promise this year.
-I'm running out of months here.  I better take care of this sooner rather than later.

I am happy with how July turned out and I am looking forward to starting August off right with a trip to Minnesota with Deb and Nikki this weekend to cross state #10 off the list of 50!