Friday
As I was getting ready to pack for Alabama, I received a call from Deb and she sadly informed me that she would not be joining Nikki and I for the weekend as she had been incredibly sick in January and the first half of February.  While we were very disappointed that Deb wouldn't be joining us, we completely agreed that her health needed to come first.  So, it looks like we will have to join Deb in Alabama another time so she can cross it off the list.

Saturday
Nikki and I headed to the airport at 5:30AM to make our 7:15AM flight.  We had a short layover in Chicago and then made it into Birmingham by 11:00AM.  Once we landed we headed out to find the shuttles to the hotel.  We were quite happy to walk out of the airport into nicer weather!


After we got checked into our hotel, we headed to the expo to pick up our race packets.  The expo was relatively small but nice.  I was able to pick up Deb's packet for her so she will at least have the shirt and gloves that we were given by the race.  We did come across a medal hanger booth and really liked a 50 states medal hanger.  I took pictures of it and grabbed the information so we could order it online at a later date.  The nice thing is that the seller was willing to custom make the hanger. 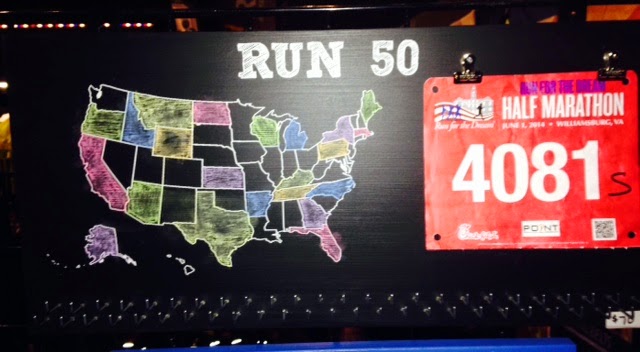 We decided to head to see the 16th Street Baptist Church as both our 7th graders had read a book in school about the bombing that happened there. 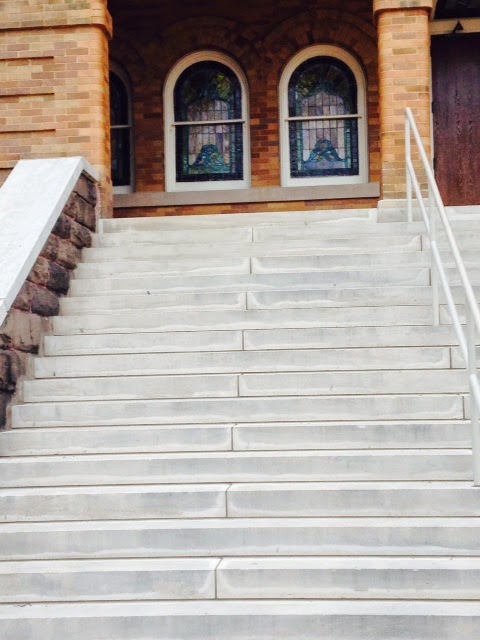 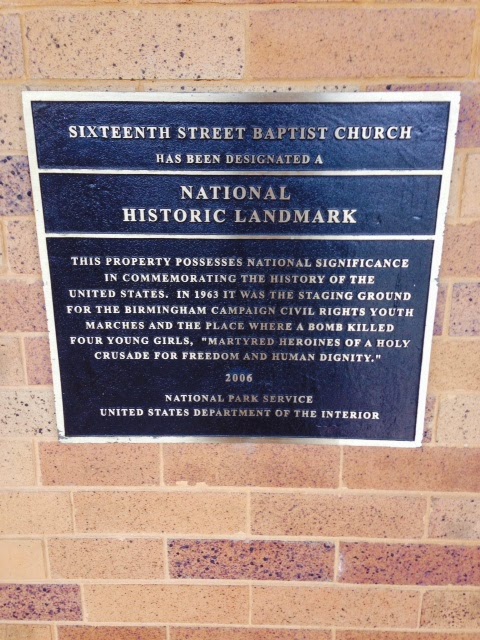 Once we left the church we went and had a bite to eat and a beer and then headed back to our hotel to rest for a bit before heading out for dinner since we were both tired from the early flight.  We eventually headed out to find some dinner but what we didn't realize was that "The Book of Mormon" was in Birmingham so all of the restaurants we wanted to try had a minimum wait time of 2 hours.  Definitely wishing we had thought to make reservations ahead of time.  We ended up back at the same restaurant we  had eaten lunch at but in the end it was food so it worked!  After we ate dinner we headed back to our hotel to get things ready for the morning and tried to get to bed early to get some rest.

Sunday
The alarm went off and I managed to only press snooze one time.  After I got up, I made some coffee and ate my peanut butter and cheese crackers (not the best pre-race breakfast but it was what I had to work with so I just went with it).  Nikki and I headed to the race start and when we were almost at our destination I realized I had forgotten my Garmin.  I couldn't decide if I wanted to go back and get it but we ended up going back since it was raining and I didn't want to have to use my phone for timing purposes, especially because it was raining.  We stopped in the hotel lobby for a quick picture and we were on our way. 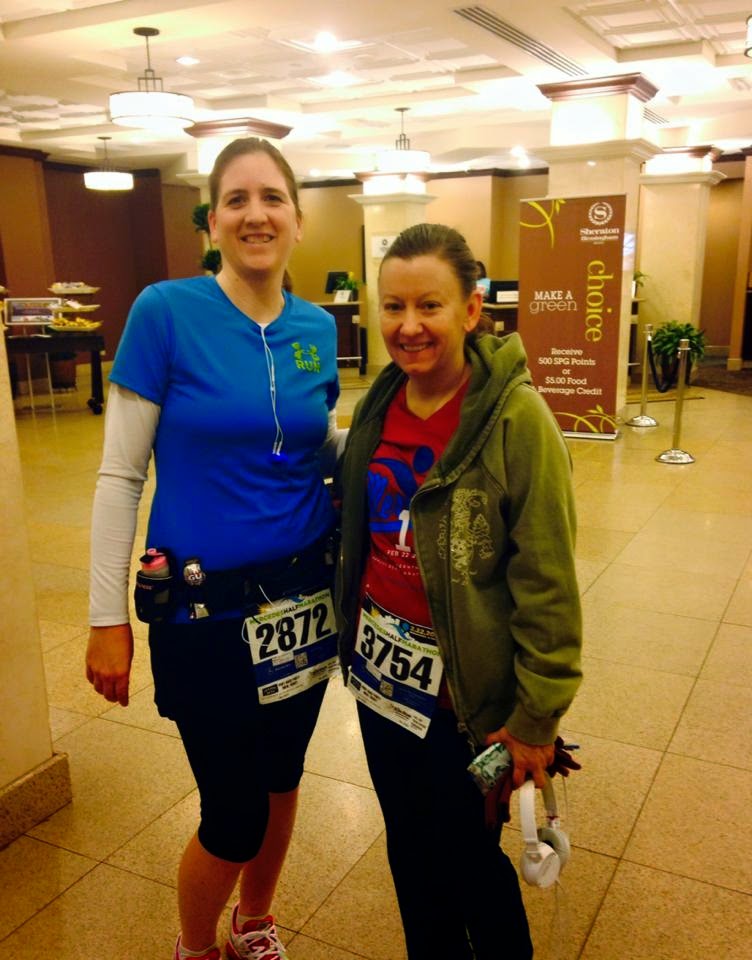 I didn't really have a plan for the race other than to get myself across the finish line.  I was thrilled with the weather even though it was raining.  50 degrees and rain is so much better than the negative temperatures and snow we were having at home.  As I was running along, I realized that Birmingham had a lot of rolling hills!  Who knew?!?!?!  Once I was within a mile of the finish I realized I was going to barely miss running a sub 2.  At that point, I pushed it as best I could but came up slightly short with 2:00:45.  Honestly I was more than happy with those results considering the course.  I collected my medal and finisher's beach towel and waited for Nikki to finish.

Once Nikki finished we headed inside to the post-race party where we were treated to a Pork BBQ.  It was definitely one of the best races for post- race food so far.  After we finished eating, we walked back to our hotel and got cleaned up.  We then decided to take a nap before heading to the airport later in the afternoon.  We headed to the airport around 2:00 and grabbed a bite to eat there while waiting for our flight to depart.  While it was a very quick trip and we missed Deb terribly, the race itself was very well organized and I would definitely run it again!

What state will we be running next?  Your guess is as good as mine.  Deb is supposed to be researching that for us!!


Complete a half in all 50 states status: 15 states and D.C. completed

Keep running, you're simply the best, and you inspire me!!
Posted by Jodi H at 2:37 PM No comments:


I closed out my January training on Saturday with an 8 mile run with Heather and Karrie.  It was the first long run of the training cycle for the Cleveland Marathon.  I have agreed to help Heather and Karrie achieve their goal of running a marathon.  The run went pretty well and we survived even though it was a chilly 11 degrees (feels like 0) when we were out there.

﻿
Mission #2: Cross off at least 3 more states in Deb, Nikki, and I's quest to run a 1/2 marathon in all 50 states (we have 36 states left....we best get moving...we aren't getting any younger!!)
Action Plan: Research 1/2 marathons in the states we haven't completed yet.
Action Plan: Actually register and participate in said 1/2 marathons.

Mission #2 had a start in January as Deb, Nikki, and I registered for a half marathon on February 22.  We will be crossing Alabama off our list once we complete the Mercedes Half Marathon in Birmingham, Alabama. 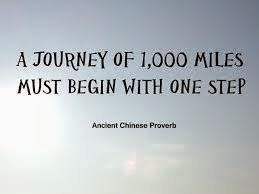 Mission #3 had a slow start in January but with marathon training in full swing, I'm confident that the mileage will add up quickly.  33.28 miles run in January (966.72 miles to go).

Mission #4: Complete 4 stair workouts per month.
Action Plan: Do one stair workout per week.
Mission #4 was going very well until I was hit pretty hard with a sinus infection and awful cold.  It kept me home from work for two days and unable to exercise for a good five days.  I completed 3 stair workouts in January.  I would say that is success as I know if I hadn't been sick I would have gotten that 4th stair workout in the final week in January. 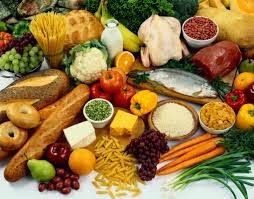 All in all I would say January was a decent month.  I didn't have a ton of running mileage but that's okay.  There are still 11 months left in the year.

Keep running, you're simply the best, and you inspire me!!
Posted by Jodi H at 6:01 PM 6 comments: