Today I ran 13.1 miles for the third Sunday in a row. The first Sunday was a 13.1 mile training run with Jenn. Dave also joined us for part of that run as he had 10 miles on his schedule that day. It was cold that day and we had to layer which is pretty typical for Ohio in February! Last Sunday I was in Austin, Texas for the Livestrong 1/2 Marathon which was the next on the list for the goal of running a 1/2 marathon in all 50 states with some dear friends! Of course there was an extreme temperature difference in Austin. It was 75+ degrees and very humid and I simply wore shorts and a tank top. Fast forward to today's 1/2 marathon and I was back in Ohio so it was back to layers. It wasn't as cold out as I thought it was going to be. The only part of me that got cold were my fingers.

Now you might wonder how I ended up running yet another 1/2 marathon today. See, my friend Dave is running the Cleveland Marathon with us in May and one of his goals during marathon training was to run a sub 2 half marathon. When he mentioned he was running The Last Chance For Boston, I happily agreed to be his pacer. The original plan for today's race was to go sub 2. We ended up altering that plan to try and go for sub 1:50 which would accomplish sub 2 as well as achieve a new PR for me. As we waited for the race to start we decided we should have a pre-race picture. Still smiling and full of energy! 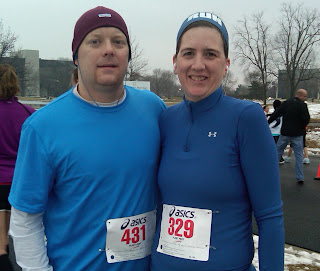 A few minutes later the race started. The course was 13 one mile loops with the .1 added on prior to the first loop. In essence we would be running 14 loops for a total of 13.1 miles. The first lap we were trying to weave around people and get into a comfortable area. My garmin showed our one mile split as 8:11 which was quite alarming to me because that was fast. In fact, it was much faster than the pace we needed to run to achieve sub 1:50. Mile two came in around 8:16 according to my watch. Mile three we came in right around 8:24. We were definitely on pace for sub 1:50. Then at mile 4 we were close to 8:30 and I was feeling it. Dave asked me how I was doing and I am pretty sure he could tell by the look on my face that I wasn't feeling to hot and was mentally defeating myself in regards to the sub 1:50 finish. He gave me a little pep talk and told me that I was stronger than I thought I was. I found it kind of funny that the pacee was giving the pacer the pep talk. Shouldn't it be the other way around? Now Dave may tell this part of the story differently so head on over to his blog and read his race report here. When we came up on mile 6 we were around 50 minutes at which point we kind of looked at each other and laughed and said yeah, let's just go for sub 2. I have to be honest, I was quite relieved at that point. I was quite confident we could definitely run sub 2 since all of our splits up until that point had been under 9 minute miles. Sometime right before mile 9, I saw a change in Dave's face. I could tell he was having a hard time. When we had just finished 9 miles, I told him we were definitely going sub 2 because we could certainly run 4 miles in 40 minutes. He agreed. I knew I had to go back to being the pacer at this point. I needed to make sure we achieved sub 10 minute miles for the final four miles. During miles 10-12, my splits were a bit faster than Dave's as I was running just far enough ahead of him to keep us at the correct pace. I felt bad at first thinking he thought I was a terrible pacer for not staying right next to him but in order to get him to his goal I had to press on. I could tell he was tired and his legs were hurting. The final mile we slowed down to over a ten minute mile pace for a short period of time but I waited for Dave and got us back on track and managed to get us across the finish line in 1:57. Dave immediately hugged me and thanked me. I was honestly very worried about him at that point because he was looking as if he may go down. Fortunately he regained his composure after getting some fluids in. The race had a really nice room set up for after the race with drinks and snacks so we headed into the warmth and did some stretching and of course had to have an after picture taken. 13.1 miles later very tired and quite sweaty! 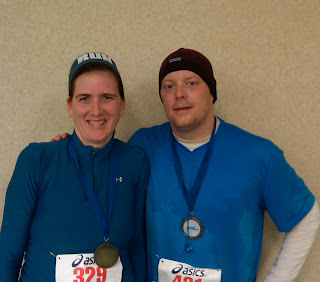 With the race completed and goal achieved I headed off for an ice bath. Even though it is really cold at first, it truly does make the muscles feel better once you are in it. After my ice bath I got all of my stuff organized and headed out to have lunch with Dave. All in all, it was a great race and I am so glad I was there to see Dave go sub 2!

Keep running, you're simply the best, and you inspire me!!
Posted by Jodi H at 8:29 PM