This week's spotlight is on Kim of (Just) Trying is for Little Girls (here). After you read her interview head on over to her blog and say hello!

Jodi: How long have you been running?
Kim: I ran track and cross country in high school. However, as a grown up I was a “jogger” off and on for years. I have been running half marathons for almost a year now.

Jodi: Why did you start running?
Kim: I turned 40 and went from full time to working part time. In January 2010, I started training for the Eugene Half in May 2010. Since I was “only” working part time, I no longer had an excuse for not training. I also wanted to lose weight and get in shape.

Jodi: How many years have you been racing?
Kim: Except for a few 5ks over the years, almost one year now.

Jodi: What is your favorite distance to race and why?
Kim: The half marathon, definitely. You need to be in great shape to run one, and very few people can do it without training. It’s long enough to be a huge accomplishment, but I am no longer “crippled” for a week after running one.

Jodi: What is your favorite race memory?
Kim: At the You Go Girl Half marathon in Tacoma, WA (September 2010), I got to run with some awesome bloggers/running moms on the Will Run for Ice Cream team. I wanted to run a sub 2 hours. Right before mile 10, I caught up to Tall Mom who was pacing T from Racing with Babes (they were attempting a 1:52). In my running mom, bloggy world, these two were superstars. I didn’t know if I should run behind them and eavesdrop for the last 3 miles or pass them. I also got to watch Tall Mom do a ballerina move around the out and back cone. That was quite funny. I finished with a 1:55:51. It was all around a great race. Here’s the link to my report:
http://23imaginaryfriends.blogspot.com/2010/11/half-marathon-rewind-6-you-go-girl.html 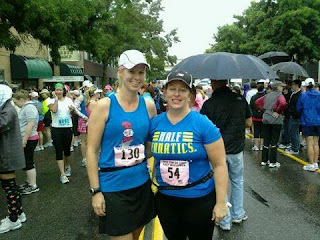 Jodi: What is your least favorite race memory?
Kim: There’s something overwhelming about mile 10, I think. At Eugene in May 2010, I passed a girl hurling in the bushes. At the Seattle Half in November 2010, I passed a guy who was down for the count at mile 10. Luckily, aid workers were rushing to help him. We were in the middle of a forest/park, so that was a tough place to be hurt. Yep, something about Mile 10 in the half… 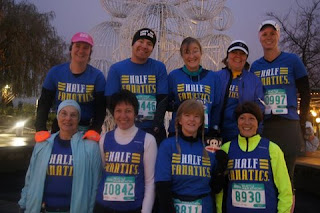 Jodi: What is your proudest running moment to date?
Kim: I ran the Cascade Half in January 2011. I didn’t train very hard for it. The weather was rainy, and windy and just plain yucky. I snuck in a 4 second (Garmin, the race wasn’t chip timed) PR. I still can’t believe it. 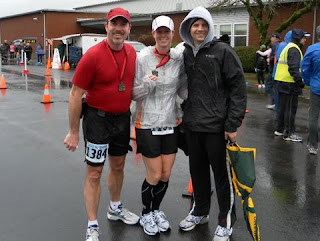 Jodi: What one item do you absolutely have to have with you on a training run?
Kim: I always carry lip balm in the pocket of my running skirt.

Jodi: What is your favorite fuel during a race?
Kim: I have three….gummi bears, Blackberry Gu and Chocolate #9 Gel. I just discovered Chocolate #9, it’s all natural and tastes like chocolate frosting!

Jodi: Who do you admire most and why?
Kim: I admire and am inspired by running moms. When my daughter (she is 14 now) was in preschool, I could have never, ever run half marathons like so many of them do. My husband calls these mommy bloggers my “imaginary friends”. I love reading and learning from their blogs.

Jodi: Do you have a favorite quote?
Kim: Lately, I keep telling myself, “it’s not IF you are going to workout, it’s WHEN!”

Thanks again for the opportunity to give you a Thumbs Up Kim! Best of luck achieving your goal of a sub 1:55 at Eugene!

Keep running, you're simply the best, and Kim YOU inspire ME!!
Posted by Jodi H at 5:00 AM