Our Chicago Rock 'N Roll Weekend festivities started on Thursday night with a pool party at Nikki's house. We all had a great time and the kids swam in the pool until it was dark and we told them we had to head home. Everyone left around 9:30 and I came home and started packing for the weekend. Friday morning, the girls picked me up around 10:00 and we headed out for our drive to Chicago (thanks for driving Marilyn). We stopped for lunch on the way and then we headed to the Expo to pick up our race packets and concert tickets on the way to our hotel. We gathered our packets and then stopped by the Garmin booth, see Deb has been doing lots of research on Garmin's lately. Her and I both have the FR60 and while it is okay, it is based on your stride so it wasn't always as accurate as we would like and it also only showed the MPH you were going not your pace. We both were really interested in the 110. Of course Garmin was offering a discount at the Expo so Deb, myself, and Marilyn all purchased one. Nikki had considered it but she had just bought the 201 from a friend for a really good price! We then decided to look at the Bondi Band booth and Deb, Nikki, and I decided to purchase some. Deb, got one that says "slow is the new fast" as well as a very pretty colorful design one. Nikki also got a pretty colorful design one. I was deciding between two different saying ones. I was either going to get "I run like a girl" or "some girls chase boys, I pass 'em". In the end I asked Deb and she said to go with the "chase boys" one! We finally made it to the Uncle Kracker booth to pick up our concert tickets and then we were off to find our hotel and freshen up for dinner at Smith and Wollensky. We sat outside on the patio and it was wonderufl. The food was absolutely amazing and the view was great! Thanks to Deb for suggesting it and making reservations for us. Following our dinner, we headed to Park West for the Uncle Kracker Concert. We met two ladies from North Dakota that were also running in the race on Sunday. They were kind enough to take our picture. 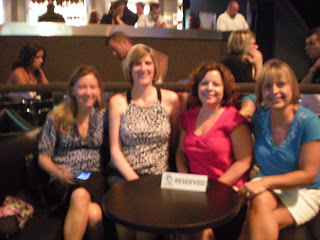 Nikki, me, Deb, and Marilyn
We really enjoyed the concert. In fact, I do believe that we all mentioned that we needed to get some of Uncle Kracker's music. It was a very small and quaint concert which was nice. I did get one picture of the band but my camera wasn't the greatest in the lighting. 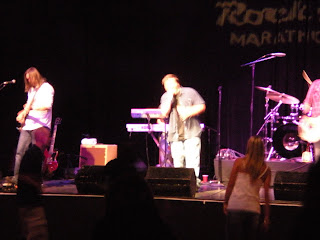 Uncle Kracker
We headed back to our hotel after the concert and headed to bed so we could head out for some shopping on Saturday morning. We did sleep in a little bit which was nice since we were all sans kids this weekend. We went into some great shops. I hit up the Lego store for a present for my son and the America Girl store for a present for my daughter. The last stop we made before heading back to our hotel to relax and get ready for dinner was Garrett popcorn. We actually stood in a line to buy some. The line moved pretty fast and the delicious popcorn was definitely worth the wait! 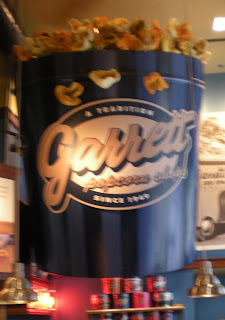 Inside the popcorn shop
We spent Saturday afternoon getting everything ready for the race on Sunday morning, doing some reading, and some napping as well. We headed out to Quartino Saturday night for some carb loading. The food there was great as well! Thanks to Deb again for finding the restaurant and making reservations especially since those who didn't have reservations had a two hour wait!! Our final stop Saturday night was at the 7-eleven. Bananas and smart water were purchased. We talked for a little bit once we got back to the hotel and then lights out by 9:30. We got up around 4:45 Sunday to eat breakfast and such before the race. Once everyone was ready we headed out for the one mile walk to the start line. Once we got there, I asked a nice lady to take our picture. 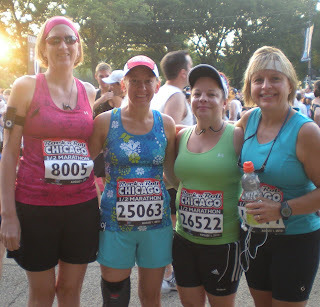 myself, Nikki, Deb, and Marilyn
After the picture, Nikki and Marilyn decided to make a bathroom stop. Deb and I headed to the Corrals and waited to start the race. 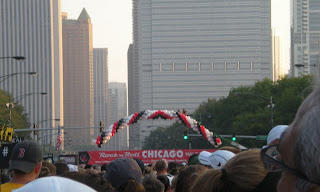 The start line from Corral #8
I was feeling pretty good and I looked up in front of me during mile 3 or so and I saw two girls with pink socks on and I wondered if they were Katye and Tonia (who's blogs I read) and then I realized they had on matching outfits so I ran up along side them and said: "You look familiar, do you blog?" and they said that yes in fact they did! I was right, it was them! At first I wasn't going to say anything because I didn't want to seem weird/stalkerish but I'm glad I did in the end! You girls were looking good out there! I ran with them for a little bit and at some point we all got separated. As the miles went by I was still feeling okay. When I got to mile 7 I heard them announce the winner of the race. We went into a tunnel which I wasn't too fond of. In fact, I had to take my sunglasses off to see where I was going. I noticed Tonia was right there with me and then off she went. Somewhere after this, I saw Tonia walking so I asked her if she was okay and she said she just needed to take a walking break. Once I got to mile ten I was starting to feel the heat and humidity. I slowed my pace a little bit. By mile twelve, I wasn't feeling the greatest and thoughts of what happened in Cleveland immediately entered my mind. At that point, I made the wise decision to slow down even more. I didn't want a repeat of Cleveland, I just wanted to finish. As I was approaching the finish line I noticed a guy next to me really struggling and I looked at him and said "come on, let's finish this". We sprinted in the last tenth of a mile. We exchanged good jobs and then he said "thanks so much, I needed that. We crossed the finish line in 2:06:57 according to my watch (my official time was 2:06:55). Once I grabbed my medal, some water, a popsicle, and an ice cold towel I headed to the family reunion area. Several bloggers that were running had mentioned they were going to meet at letter R for run so I headed over to hopefully get to meet them. Once I got there, I saw two adorable little ones wearing "run mommy run" shirts and I knew right away they had to be Jamie's kids! Right then I looked up and sure enough, it was Jamie! We exchanged hugs! It was great to finally meet her! Her husband was kind enough to take our picture! 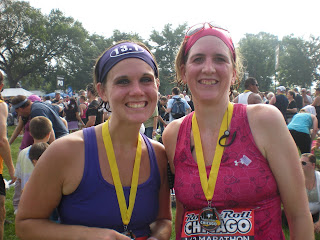 Jamie and I
A short while later, Katye and Tonia made their way to the letter R. Once again Jamie's husband was kind enough to take pictures. 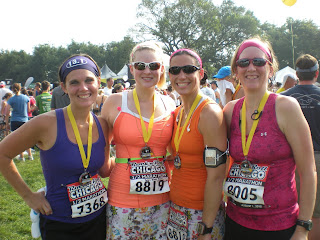 Jamie, Katye, Tonia, and myself
We talked for a few minutes after this and I said I need to head to the letter C for Cleveland to meet up with my friends. About two minutes after I walked to the letter C, Marilyn came in. We waited for Deb and Nikki for awhile and then Marilyn needed to move to the shade. We figured we would see them because we sat right by the opening to the family reunion area. After a few minutes I decided to walk back to the letter C to look for them. Sure enough we had somehow missed them. We were all feeling really beat down and we had to repeat the mile walk back to our hotel. That was the longest mile walk ever, I swear!! We all showered and packed up and grabbed some lunch. Even though we were very sore we were already talking about doing another 1/2 in Ohio in September (this 1/2 would give Nikki her Ohio 1/2 and the rest of us our 3rd Ohio 1/2). We also talked about some other races we would like to run. Our next 1/2 marathon in our 1/2 marathon in all 50 states quest is going to be in Detroit, Michigan. The car ride home was very long as we were all very sore! We got back into town and headed to get some dinner! I think we finally got home around 9:30. It was a wonderful weekend! Time spent with great friends, enjoying wonderful food, shopping, dinner, and oh yeah 13.1!
Keep running, you're simply the best, and you inspire me!!
Posted by Jodi H at 10:56 AM