This weeks Thumbs Up goes to Julie Reardon. When I contacted Julie, via the dailymile to see if she would be willing to allow me to give her a thumbs up, she was hesitant stating: "I'm not sure I'm worthy". My response to her was "Everyone is worthy!!! It's all about that fact that you got out there and started something and have goals! :)" Without further delay, I give you the question and answer portion of Thumbs Up Thursday!


Jodi: How long have you been running?
Julie: I started in high school and have had 24 years of stops and starts along the way but have been running consistently now for just over 3 years.

Jodi: What motivated you to start running?
Julie: My dad, he had been a runner since I was born. I went to Magnificat High School and was just mediocre at most sports and did not want to be sitting on the sidelines watching. So my dad convinced me to go out for cross country. I quit after the first day of practice my freshman year when I couldn't keep up. My dad was a regular in the Cleveland Revco 10k, so I trained with him and we did the race together in May 1986. I went out for cross country again my sophomore year and had a blast running all through high school.

Jodi: What motivates you to continue running?
Julie: That's a tough one and it has changed many times over the years. But at this time it is my brother Bill. He started running about 10 years ago and started doing many half marathons. I enjoyed hearing his stories so much that I wanted to join him and I did, completing my first, the Akron Half in September of 2007 (still my PR in a half). This year I did the Cleveland Half Marathon while Bill and my little brother Brad did the full marathon. It was so fun to share the experience with them. 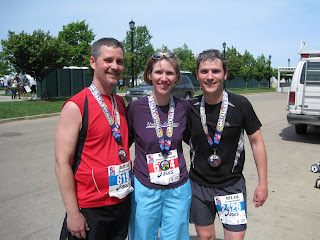 Bill, Julie, and Brad after the 2010 Cleveland Marathon
Jodi: How long have you been racing?
Julie: Well with the Revco 10k being my first it has been 24 years. I love racing! It keeps me motivated!
Jodi: What is your favorite distance to race and why?
Julie: I'm not sure I have a favorite distance. I probably do the most 5k's as there are so many offered but I think I would prefer a 5 miler or 10k. I think it takes me some time to find my best pace and usually that is when a 5k is ending. I know it is not ideal but I usually end up starting out too fast and then I catch my breath by mile 2.5 or 3. In a longer race I can pick up my pace for the next 2-3 miles and finish stronger.
Jodi: What is your favorite race memory?
Julie: In the spring I participated in the Flying Pig Marathon Relay with my husband, Dennis, brother-in-law Breen, and sister-in-law, Mary Lou. It was Dennis' second race experience and Breen's first. It was so fun listening to their take on it and their will to do it again next year. Also, watching Dennis cross the finish line with all the full marathoners was just priceless.
Jodi: What is your proudest running moment to date?
Julie: Running the Flying Pig Half Marathon in 2009 for my friend Jen's son , John Owen and raising over $3,000 to help end Duchenne Muscular Dystrophy. 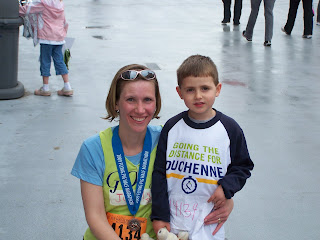 Julie with John Owen after the 2009 Flying Pig Half Marathon

Jodi: Do you have a favorite quote?
Julie: The race is not always to the swift but to those that keep on running. ~Author Unknown

Jodi: Do your kids like to run with you?
Julie: No, not really. My daughter has run with me a couple times but mostly she will ride her bike while I run. My youngest son is 5 and he is going to be a distance runner. When I say I'll race you to the end of the street, he'll pace himself so he can run the entire way unlike my other two that will sprint and walk and sprint some more.

Jodi: What is your favorite time of day to run?
Julie: The morning, I am not a morning person but if I don't get up and do it right away chances are I won't get to it.

Jodi: What is your current goal?
Julie: A marathon - probably Columbus this fall. My brother is doing it and I'd like to get one on my racing resume before I turn 40 next spring. Also, to complete a 5k in under 25 minutes.

Thank you for giving me the opportunity to give you a Thumbs Up Julie! Best of luck achieving your current goals. It is evident that you have the desire and determination to get it done!


Keep running, you're simply the best, and Julie YOU inspire ME!!
Posted by Jodi H at 9:06 PM