So, last week I saw that Ashley had commented on Thumbs Up Thursday. She mentioned that she really enjoyed reading them. So, I figured why not ask her permission to spotlight her this week. I sent her a message and she was happy to oblige. With that said, I give you the question and answer portion of Thumbs Up Thursday!!

Jodi: How long have you been running?
Ashley: About 3 years on and off. I've only been consistently running since last May.

Jodi: Why did you start running?
Ashley: Originally I started running to get in better shape while I was a figure skater. When I was forced to quit figure skating due to a back injury, running became the only type of exercise that felt like a challenge for me and I learned to love it, now I think I love it more than skating sometimes, which is a big feat considering I grew up as a figure skater.

Jodi: How many years have you been racing?
Ashley: 1 year seriously, I had done a few 5k's and a four miler previously but I didn't really race them and I didn't know a thing about training until last spring/summer. I've learned so much already. 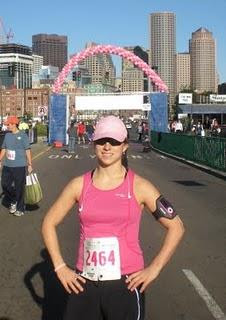 Ashley before a 5k 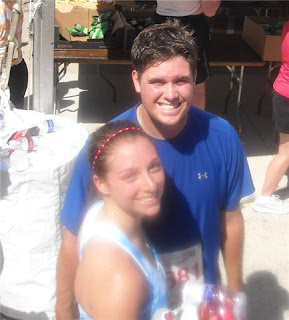 Ashley and her boyfriend after 4th of July 10k

Jodi: What is your favorite distance to race and why?
Ashley: Half marathon, it's not so fast I feel as though I'm sprinting the whole time like a 5k but it's not too long for me, it's the easiest race distance for me to pace myself so far.

Jodi: What is your favorite race memory?
Ashley: Finishing my first marathon in May 2010. It was an amazing feeling. I remember coming into the finishing area and just feeling this sense of relief and accomplishment. I don't know that I'll ever forget it. 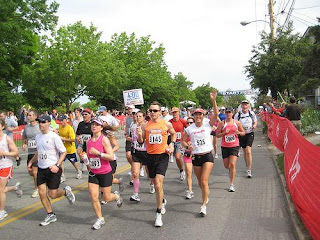 Ashley at mile 9 of the 2010 Vermont City Marathon 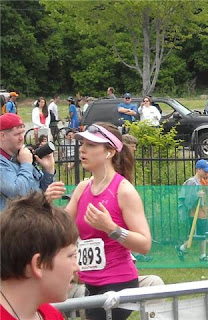 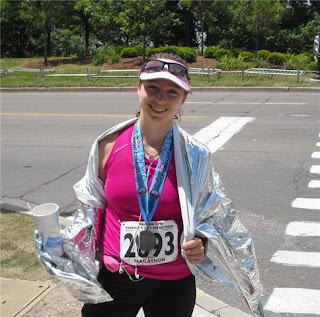 Ashley after the 2010 Vermont City Marathon

Jodi: What is your least favorite race memory?
Ashley: Having a breakdown on a hill at mile 15 of the marathon. I remember seeing my mom, aunt, and boyfriend on the side of the street and just begging for my gatorade which they didn't have. They just pushed me away and told me to keep going. I was crying at this point. It was definitely a low point in the race.

Ashley's breakdown at mile 15 of the 2010 Vermont City Marathon

Jodi: What is your proudest running moment to date?
Ashley: Hmmm....either finishing my first marathon this spring or running a sub 7 minute mile recently. Both felt like things I never imagined I'd do and I have done now!

Jodi: What one item do you absolutely have to have with you on a training run?
Ashley: If I had to choose one it would be my Garmin but even that I don't bring with me on all my runs...there's not one specific thing for every run...but for long runs, definitely my handheld water bottle, especially in this heat!

Jodi: What is your least favorite cross-training activity?
Ashley: Lifting weights. Just not a fan at all.

Jodi: Do you have a favorite quote?
Ashley: Ahh...I have so many. Hmm...I'm currently reading Run: The Mind-Body Method of Running by Feel by Matt Fitzgerald and he has a quote at the start of each chapter, and this one catches my eye every time: "Pain is good because it teaches your body and your soul to improve"- Lance Armstrong. I think I like it because I hold back frequently from pushing myself during harder workouts (i.e. speedwork) and know that I need to push myself and that certain types of pain aren't always bad.

Jodi: Finish this statement, after a training run I feel __________.
Ashley: Accomplished.

Jodi: What is your current goal?
Ashley: To qualify for the Boston Marathon, my qualifying time is 3:40.

Thank you for the opportunity to give you a Thumbs Up Ashley. Best of luck achieving your Boston Marathon goal.

Keep running, you're simply the best, and Ashley YOU inspire ME!!
Posted by Jodi H at 7:35 PM