Yesterday was the final 20 miler of my Columbus Marathon training schedule.  Over the course of the past 15 weeks I have completed 2 other 20 milers as well as a 19 miler with many other distances mixed in.  I ran the 19 miler back in August and my friend Bill joined Missi, Deb, and I on our run and I had an excellent run with a fantastic pace!  One week later I had my first 20 miler on the schedule and I had calf cramping before we even made it to mile 5.  It was a very long and frustrating run that ended with me doubting my ability to run a respectable 26.2 come October 16th.  The second 20 miler took place on September 11th.  I ran the first 12 miles with Deb and Missi and felt pretty good.  After I got some more water and refueled I headed out for the intended last nine on my own (the training plan had called for a 21 miler). The wheels fell off at mile 17 with some calf pain and I had to walk a bit and called it a day at 20 and was once again incredibly frustrated and disappointed with my run.  I exchanged a few messages with my friend Joe and he mentioned it sounded like dehyration and encouraged me to work on my hydration and nutrition on the rest of my long runs.  Last Sunday I ran the Philly Rock and Roll 1/2 Marathon and I was diligent about my nutrition and hydration and felt great for the first 11.5 miles and then I experienced some mild calf pain and major chafing from body glide application gone wrong.  I did manage to run a sub 2-hr half last weekend so I was feeling really good about things.  This past week I only clocked 9 miles between Monday and Saturday.  I was trying to catch up on sleep and get the calf to heal as best I could for my 20 miler yesterday.  I made a point to hydrate like crazy on Saturday.  I needed wanted to have a good 20 miler so I was doing everything in my power to set myself up for success.  Missi and Deb had 12 miles on their schedule for yesterday.  In a few email exchanges I was asked when I thought I would need them most.  I was certain it would be for the final 12 so with that said the plan was for me to do my first 8 prior to meeting Missi and Deb for their 12.  I slept pretty well Saturday night and was up in plenty of time to have a cup of coffee, some peanut butter toast, and a banana before heading to the Metroparks for my first 8 solo miles.  I also decided to put some biofreeze on my left calf which has been the one giving me the most trouble.  I drank water on the odd miles and drank sustain (my electrolyte drink of choice) on the even miles.  I also had some Power Bar Chews after the first hour.  I was feeling great the first 8 miles and made it back to meet Missi and Deb just a few minutes after our planned meeting time.  At this point I refilled my water bottles, grabbed my sample size biofreeze and threw it in my water belt and used the restroom before we headed out for the final 12.  I continued to use the same fueling strategy throughout the run.  Around mile 13 we decided we were going to stop at the Pro Shop and refuel, use the restroom, and Missi was going to see if she could get some socks in the Pro Shop as she had forgotten hers and she was developing blisters.  While we were refilling our water bottles I took in some more Power Bar Chews.  I also decided to apply my biofreeze to both calves at this point.  Just after mile 14 we came across these very interesting mushrooms! 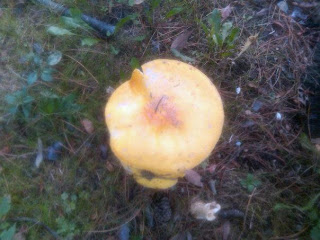 Missi found them very odd and really wanted to know what type of mushrooms they were so she got up close and personal with them! 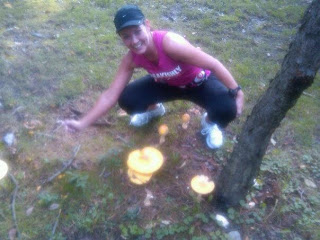 Of course Missi ended up posting an article on facebook after the fact about 5 men getting sick from poisonous mushrooms.  Can you guess what those mushrooms looked like?  Yep, exactly like the ones above.  As Missi said "good thing we didn't eat them (not that we would have)"!  Oh wait, I'm supposed to be talking about my 20 mile run.  Where was I?  Oh yes, I was at mile 14.  I continued to feel really good on the way back with no calf pain to speak of.  Dave had mentioned that he may be in town on Sunday and he may run a few miles with us but he said he wasn't really sure.  By mile 14 I figured he had decided not to join us however to my surprise he was on the trail waiting for us when we got to mile 17.  It was so nice to see him.  He jumped in with us and I was in the zone and just running and listening to my music.  I must have really been zoned out because Dave ran up behind me and tapped me and scared the daylights out of me.  As we ran a mile or so together he looked down at his watch and said 9:21 holy crap.  I kind of laughed and mentioned that my watch had me closer to 9:35 pace.  Sometime between miles 17-20 Missi yelled out "you're kicking a** today Jodi".  It definitely made me chuckle.  By mile 18 I was smiling from ear to ear because I was having such a great run.  I decided to see what I could do for the final 2 miles.  I finished up my final mile with an 8:59 pace.  I was thrilled with my final time of 3:12:24 (9:37 pace) as my goal marathon pace is around 9:40.  Yesterday's run was nothing short of perfect.  Now if I can just bottle it up and bring it along for Columbus I will be one happy marathoner!!

Keep running, you're simply the best, and you inspire me!!
Posted by Jodi H at 10:11 PM