This week's spotlight is on Joanna of Joanna Runs (here).  I had the pleasure of meeting Joanna the night before the Cleveland Marathon at the Pasta Dinner.  I thoroughly enjoyed talking with her.  In fact, the conversation flowed so well it seemed as if we had known each other for years.

Jodi:  How long have you been running?
Joanna:  I ran cross country in high school and ran recreationally through college, but never seriously. I started endurance running in April 2007.

Jodi:  Why did you start running?
Joanna:  I ran in high school because my friends did, honestly. There were three reasons why I started really training in 2007.
1. I'd always had it in the back of my mind that I might tackle a marathon at some point in my life.
2. I was in the middle of my PhD program and running provided stress relief. 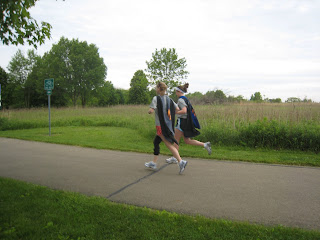 3. I'm a very proud Penn Stater. Penn State has the largest student-run philanthropy in the world. It's a dance marathon called THON. Last year alone THON raised over $9.5 million for pediatric cancer research. My sorority was involved in THON, and though I never danced in the event (sleep deprivation + Joanna = disaster), I was always proud to be part of it. After college, I wanted to find a way to keep fighting cancer, and Team in Training (who I trained with for about 3 years) gave me that opportunity. Plus, some amazing friendships.

Jodi:  How many years have you been racing?
Joanna:  My first half-marathon was the Chicago Distance Classic in August of 2007, so I'm coming up on 4 years. 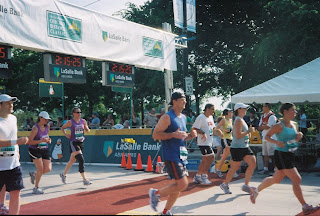 Jodi:  What is your favorite distance to race and why?
Joanna:  I love the half- and full marathons for such different reasons. The half because I'm not afraid of the distance, and I find the challenge to continue setting new PRs both challenging and rewarding. Plus, I find the race itself thrilling. The full because I love the structure and the rigor of the training cycle. If I had to pick one, I guess I'd say the half.

Jodi:  What is your favorite race memory?
Joanna:  So many to pick from! But...I think, seeing my husband and son at the half-way mark of the Lewis & Clark Marathon last fall. I really thought we'd missed each other, then at the last minute before I entered the trail (where there were no spectators) I saw them. They both yelled "Momma!" and I just beamed. And teared up maybe a little.

Jodi:  What is your least favorite race memory?
Joanna:  That one's easy--bonking during the Cleveland Marathon. Hands down.

Jodi:  What is your proudest running moment to date?
Joanna:  I was really proud to finally break 2 hours in the half this spring, but I think I have to go with the finish of the Lewis & Clark Marathon. I was injured when I ran my first marathon (Detroit), so I really didn't know what to expect from myself. L&C was also the first race I trained for by myself. I finished faster than expected and felt great. It kind of proved to me that there's a lot more inside than I was giving myself credit for. 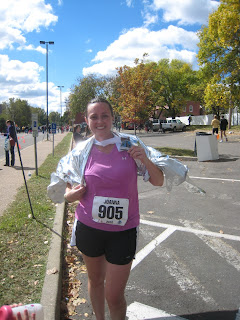 Jodi:  What one item do you absolutely have to have with you on a training run?
Joanna:  For long runs, GU, absolutely! For other runs, my shoe ID. I feel so much safer with it.

Jodi:  What is your favorite fuel during a race?
Joanna:  Lemon-lime Gu.

Jodi:  What is your favorite post race snack?
Joanna:  Chocolate milk pretty much never gets old. :)

Jodi:  Who do you admire most and why?
Joanna:  I tend to admire people who have overcome significant adversity not in just one situation, but in life in general. My best friend has this quote she loves, I think it's from Felicity, "I'm convinced that tragedy wants to harden us, and that our mission is to never let it." Although I live in Missouri now, I'm a third generation West Virginian. We're a tough people, people that value really rugged individualism. When there's that will not just to survive, but to overcome, and maybe most importantly to do it on one's own terms, I respect that a lot.

Jodi:  Do you have a favorite quote?
Joanna:  "You're only seven and a half once." I saw this on an ad when I was in college and it stuck with me. I have a tendency to be a work-a-holic, so it's good to remind myself to live a little.

Jodi:  Please feel free to add anything else you feel will help others lace up their shoes and get out there and run!!
Joanna:  I swear to you, if I can do this, anyone can! My family isn't particularly overcome with athletic genes, I work a million hours a week and have a 3-year-old. Running isn't "just another thing on the pile," it's the thing that keeps me sane!

Thanks again for the opportunity to give you a Thumbs Up Joanna! Best of luck in achieving your sub 4:10 marathon.


Keep running, you're simply the best, and Joanna YOU inpsire ME!!
Posted by Jodi H at 5:00 AM