This week's spotlight is on Brian A (here). After you read his interview head on over and check out his training. He is one impressive fellow!

Jodi: How long have you been running?
Brian: I've been running all my life and used to run home from school to ensure that I arrived on time to babysit my younger sisters before my father left for work on the night shift.

Jodi: Why did you start running?
Brian: However, I didn't formally use running as a training vehicle until 1996, when I turned 30 after gaining a ton of weight in my 20's and needed to battle the pounds. Within 6 months, I lost 35 pounds after tightening my diet and running about 30-45 minutes 4-5 times a week.

Jodi: How many years have you been racing?
Brian: I didn't formally begin "racing" until the fall of 2007 when I ran in a 5k charity event we sponsored at work. I was fighting off injuries and hadn't formally trained for the 5k, but I ran it in 26:21 (8:28 pace). The following week, I ran/walked the 2007 Chicago Marathon on a dare from a friend who decided not to run in the event, but didn't want to waste his bib.

I didn't realize it at the time, but those events would be my high-water marks until 2010, as I broke my left ankle before the 2008 Chicago Marathon and spent 2009 battling injuries, inconsistent training, and mounting weight gain.

Jodi: What is your favorite distance to race and why?
Brian: Before 2010, my response would have been the 5k, but I've fallen in love with half marathons after never running in one before this year. 13.1 mile events require a delicate balance of speed, endurance, determination, and patience that works well for me. My worst half performance of 2010 was 1:59:38 in 90 degree heat and a heavy downpour of rain in the middle of the event. I found out a lot about myself that hot day in Minneapolis: finishing counts and a true competitor has a responsibility to finish strong.

Jodi: What is your least favorite race memory?
Brian: In October, 2009 I returned to the charity 5k that kicked off my racing career after fighting off injuries for more than a year and proceded to put in my worst performance ever: 28:40 (9:13 pace).

My legs were dead after the first mile, but I kept chugging along until the 2.5 mile mark when a colleague from the office running in his first race saddled along my left side. He and I exchanged a few pleasantries and I blasted off in an attempt to finish the event before he did; which I accomplished, but he still beat me by 24 seconds overall due to chip timing.

That event was a wake up call for me; I wasn't even the best runner at the office anymore. Something had to change.

Jodi: What is your favorite race memory?
Brian: A year later (October, 2010), I returned to the charity 5k, but as a different runner and person on the heels of losing nearly 60 pounds and participating in 16 events in 2010.

This year, event organizers held both 5k and 10k events, where 5k competitors completed a turn around and had to sprint past 10k runners to return to the start/finish line. The event was held a week before the Chicago Marathon and I was in primo condition, so I flew past a long line of competitors in the fastest mile split of my running career; my colleagues from the office saw me and voiced their approval.

I finished in the top 4-percent of that event; winning a silver medal for my age group. But it meant more to me than anything that my colleagues saw me at my best that day and that a commitment to change fostered success. 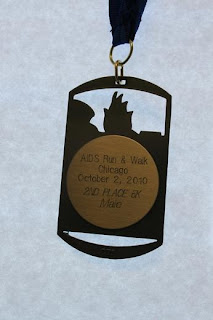 Jodi: What one item do you absolutely have to have with you on a training run?
Brian: I've been carrying water bottles in training runs and events ever since the beginning. A close second are my running watches (I usually wear 2 in events; one as a backup).

Jodi: What is your favorite fuel during a race?
Brian: I usually don't eat in events, but I add a sodium/electrolyte mixture to my carry-on water bottle to replace mineral loss and stay hydrated.

What is your favorite post race snack?
Pancakes and waffles. I know; pretty generic. But that's usually what I crave for after big events.

Jodi: Who do you admire most and why?
Brian: I admire individuals who have a strong sense of mission and destiny, who harness their energies to achieve their goals.

I've recently used John Adams as an example with a colleague at the office. One of the reasons Adams was such an influential leader at the beginning of the American Revolution was that he knew the passions of the general populace due to his travels as a lawyer and businessman on horseback. He went to the business; not the opposite. That wasn't the case with many of his contemporaries.

The same could probably be said of Kelly K and Ben W who founded the Daily Mile online community. There were a number of individuals who were posting workouts/event results on Twitter, Facebook, and independent blogs, but Kelly and Ben had the courage, foresight, and vision to build a community; validating the adage from the film, Field of Dreams: "If you build it, they will come."

Jodi: Do you have a favorite quote?
Brian: "Every man dies. Not every man really lives." William Wallace, the character Mel Gibson played in the 1995 movie "Braveheart," has been credited with saying that.

Jodi: What is your current goal?
Brian: My biggest goal for 2011 is to qualify for Boston in 2012. I may have stated that in 2010, but it was more aspirational than reality. My training and race performances have brought me to the point where a BQ marathon performance is within my grasp if I stay the course and keep injuries at bay.

My second biggest goal for 2011 is to finally win an event before year's end. It's taken several years, but I know what the "front of the pack" looks and feels like now; I'm not afraid to mix it up in races anymore.

Jodi: Please feel free to add anything else you feel will help others lace up their shoes and get out there and run!!
Brian: My biggest hope is that strong athletes will work harder to spread the joy and accomplishment of running across the globe. It breaks my heart to see a runner run 15 miles and post a frowny face to describe the workout on Daily Mile. You're kidding me? There are runners who have never run that distance; what do they make of runners who post frowny faces or describe indoor runs on the "dreadmill."

That's not what William Wallace, John Adams, Kelly K, or Ben W would do.

"Joymill" not "Dreadmill," let's spread the word and build a healthier and more positive world to live in.
What Thumbs Up Thursday would be complete without photos? I give you Brian A!! 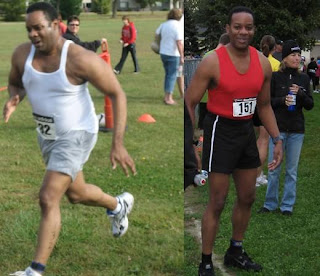 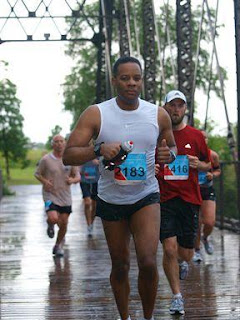 Brian in the closing legs of the Twin Cities Half marathon in July. 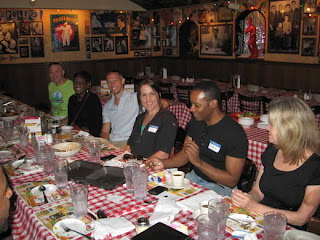 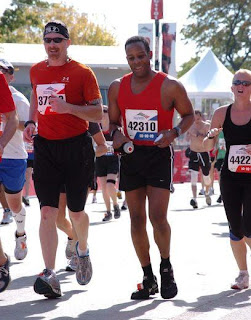 Brian prior to crossing the Chicago Marathon Finish Line.
Thanks again for the opportunity to give you a Thumbs Up Brian! You have an amazing outlook on life! Thank you for sharing your story with us! Best of luck in achieving your 2011 goals!

Keep running, you're simply the best, and Brian YOU inspire ME!!
Posted by Jodi H at 6:02 AM