This week's spotlight is on Brian (here). After you read his interview head on over and say hello and check out his training! 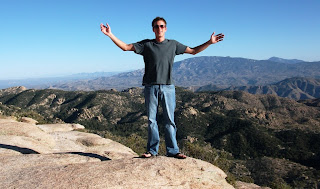 Jodi: How long have you been running?
Brian: I started running in January of 2010

Jodi: Why did you start running?
Brian: Toward the end of 2009, I was feeling pretty down on life. I was smoking a 1/2 to a full pack of cigarettes a day and drinking 5-6 nights a week, often in excess. I don't want to come off as someone who was down and out. I was doing well at work and had plenty of friends, but in general just wasn't very happy with my life. I had been a smoker for 10+ years and just sick of it. Constantly partying just wasn't doing it for me either. It was also in late 2009 that I started reading and following the Run for Dom efforts of Joe (here). The cause was a no brainer to support and after making a gift, Joe and I did some emailing back and forth about running and Pittsburgh. I had told Joe I was hoping continuing to follow Dom and his journey would inspire me to lace up and get out there. To make a long story short, I made the decision that I was not only going to sponsor a RFD (Run For Dom) mile, but i'd run that mile at Pittsburgh as well. I started training shortly after the new year. My first run was two miles, it took me 20 minutes and I wanted to throw up when I was done. I decided I must be crazy to think I was going to be able to run 11.1 more on top of that in just 5 months, but I stuck with it, slowly started adding a mile here and there and before I knew it I was crossing the Pittsburgh finish line after running for 1:53, covering a distance farther than I had ever run before. My longest training run for that event had been 10 miles. The last three miles of Pitt were tough. When I crossed that finish line I was exhausted and really didn't think I ever wanted to run another step. Within an hour of finishing though I was already thinking about what I would do differently next time I ran the distance, I was hooked! I took a job transfer from Ohio, to Arizona in June of this year and the move to sunny Tucson has only increased my love for the sport. For a born and bred Ohio boy, getting to experience 55-69 degree weather most days in December is heaven. Being out on the roads and trails with blue sunny skies and mountain views is something that I don't think will ever get old. I just broke 800 miles for the year on Tuesday of this week. Oh, and I'm happy to say I am still smoke free too! 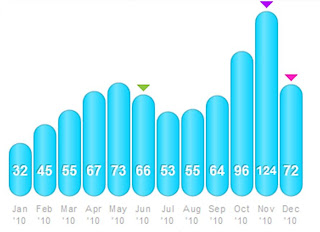 Jodi: How many years have you been racing?
Brian: As I just started running this year I'm really new to racing and haven't come anywhere near being competitive. I've ran two 5-K races, a 10 miler, and two Half marathons this year. That has really been the extent of my racing.

Jodi: What is your favorite distance to race and why?
Brian: As I currently only have three distances to choose from right now, I would pick the Half marathon, probably because just last month I ran my second half and demolished my old PR by over 11 minutes. 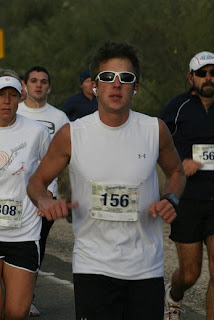 Brian at the start of his 2nd 1/2 marathon 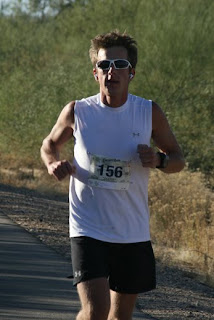 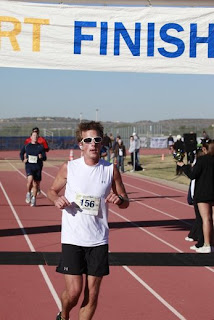 Brian at the finish of his 2nd 1/2 marathon


Jodi: What is your favorite race memory?
Brian: I think running the Pittsburgh Half will always be at the top of my list. Getting to be part of RFD and that weekend is an experience I will never forget.

Jodi: What is your least favorite race memory?
Brian; I have been fortunate so far in my running career. While I have only raced five times, I have had pretty positive experiences at all the events. I'm sure that rough day is looming out there waiting though.

Jodi: What is your proudest running moment to date?
Brian: I set a shiny new PR of 1:41:37 at a local Half last month and while that felt great, the final miles of Pittsburgh in the heat, humidity, and rain was so much more difficult. Thinking back to how I felt and knowing I gutted it out that day still makes me pretty proud. Those were to this day probably the toughest three miles I have ran to date. 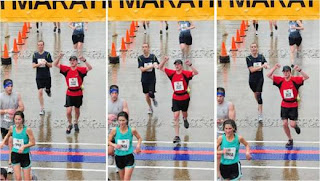 Jodi: What one item do you absolutely have to have with you on a training run?
Brian: I have always been a music lover, so there is no better feeling than running with music. I have forced myself to run silent on several occasions, but I am really much happier if I have my iPod.

Jodi: What is your favorite fuel during a race?
Brian: I've only fueled mid-race during the two Half Marathons. I used Mountain Berry Clif Bloks for Pitt and I used Caffeinated Orange Gu for the Fleet Feet Half last month. I actually now prefer the Gu and really haven't tried anything but the Orange Caffeinated ones, but they treat me well.

Jodi: What is your favorite post race snack?
Brian: I seldom find myself very hungry right after a race, but always enjoy a good smoothie.

Jodi: Who do you admire most and why?
Brian: My grandfather has passed away, but he will always be someone I admire greatly. At a young age, my grandfather had a stroke and paralysis of his right side resulted. Despite being disabled for over half his life, I don't ever remember seeing my grandfather upset or angry. He had a hard time speaking, but lived his life in a way that taught me a very valuable life lesson. My grandfather was dealt a pretty rough hand yet had an outlook on life more positive than many people I know. Whenever someone asked Bob how he was doing, he only ever had one response, EXCELLENT! Life's too short to spend it being upset about inconsequential situations and I will always admire my grandfather for teaching me there is no sense being down about what you don't have. Spend life being thankful for what you do.

Jodi: Do you have a favorite quote?
Brian: I just read this quote for the first time last week, but it's a favorite of mine right now: "Happiness is always a by-product. It is probably a matter of temperament, and for anything I know it may be glandular. But it is not something that can be demanded from life, and if you are not happy you had better stop worrying about it and see what treasures you can pluck from your own brand of unhappiness."

Another favorite of mine is: "If you set out on an adventure, and you're completely convinced you're going to be successful, why start"

Jodi: Finish this statement, when I run I feel_______.
Brian: Clean: I first heard Kristin Armstrong use the word "clean" to describe how she felt after running, so I am stealing it from her, but I think that sums it up pretty well.

Jodi: What is your current goal?
Brian: The Half Marathons have been fun, but I decided I was ready to join the big leagues a couple months back and go for a full marathon. Deciding which marathon I wanted to run was an easy choice. Some runners are into the Rock & Roll Marathon series but I am a fan of the Run for Dom Marathon series and the next stop on the RFD circuit is Austin 2011. I'm currently in my 10th week of my cycle and so far training is going well. This past weekend I set a new distance record with an 18 mile training run in 2:45. The training cycle is flying and I can't believe that in just 10 weeks I am going to be toeing the line in Austin. If training keeps going well and I can stay injury free I am feeling pretty good about a solid marathon debut. My goal is simple, finish, but I hope to do so in under 4 hours without walking as well.

Thanks again for the opportunity to give you a Thumbs Up Brian. Best of luck achieving your current goal of finishing the 2011 Austin Marathon. As I see it, you are going to fly right through it, sub 4 hours and all! 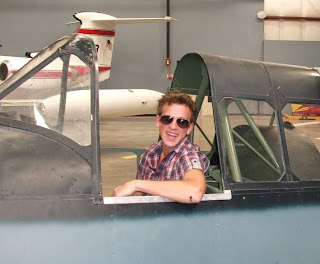 Keep running, you're simply the best, and Brian YOU inspire ME!!
Posted by Jodi H at 6:02 AM