The blogger meet up puzzle at the Chicago RNR 1/2 Marathon is complete today as this week's spotlight is on Katye of Long Legs On The Loose (head on over, after you read her feature of course, and say hello). If you read last week's Thumbs Up Thursday, you know that I met Katye as well as Tonia around mile 3 of the Chicago RNR 1/2 Marathon. Lucky for me, she wasn't creeped out when I ran up to her and Tonia on the course and introduced myself and she was more than happy to agree to being spotlighted this week. 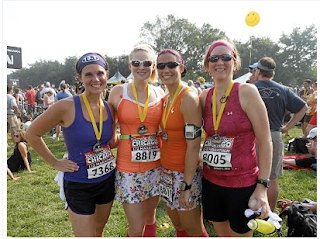 Yes, I think you have seen this picture for three weeks in a row now! Chicago RNR 1/2

Without further delay, the best part of Thumbs Up Thursday....

Jodi: How long have you been running?
Katye: Only 1 year and 1 month! I'm so excited by all I've accomplished in that short period of time. I've found something I truly love and I feel so blessed!

Jodi: Why did you start running?
Katye: Beacause I can! I got a Team In Training pamphlet, went to an info meeting, and before I knew it I was training to run a half marathon and fundraising for blood cancers. There are so many people who would do anything to be able to run... I am blessed to be able to and that is why I pushed through (even though I really didn't like it in the beginning).

Jodi: How many years have you been racing?
Katye: My first ever 5K was last September, my first half marathon was last January (I ran my first half in the same week I turned 21! It was an exciting week), and my first marathon in June! 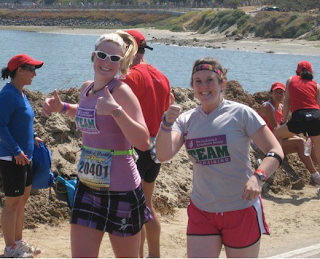 Katye and Emily around mile 22 of Katye's first marathon!!
Jodi: What is your favorite distance to race and why?
Katye: Very hard question. I tend to prefer longer distances. I'm not fast and it takes me a few miles to really feel like I'm in the swing of things so 5K makes me really nervous! 10 miles is a lot of fun... it's like you get ready for a half marathon, but at mile 10, you don't have that extra 5K to go! But honestly if I prepare myself correctly I really love any distance. It's very mental for me!
Jodi: What is your favorite race memory?
Katye: Even harder question! As amazing as PRing and running my first marathon have been, I think running my first half (The Disney Half Marathon in January '10) was amazing. Never in my dreams did I ever think I would run 13 miles! Once I crossed that finish line I was so incredibly proud of myself and really felt like an endurance athlete :). I just couldn't believe I actually did it!
Jodi: What is your least favorite race memory?
Katye: Ugh! Having an asthma attack in the middle of the Baltimore Running Fest 5K last year. It was humid and I just couldn't get a breath in and I let myself panic a bit which made it worse. I finally got myself under control and still finished under 29 minutes but it was scary!
Jodi: What is your proudest running moment to date?
Katye: Being able to run my first marathon wtih a sign on my back saying, "I've raised $26K for cancer...now I'm running 26 miles for cancer!"
Jodi: What one item do you absolutely have to have with you on a training run?
Katye: Goodness... I have many things I WANT to have with me but I'd say what I NEED is my Road ID. You never know what could happen out there. I even wear it at the gym. Just because I'm inside with people doesn't mean they know who I am or what to do! Now as far as what I really love to have with me...running skirt, Gracie (my Garmin), and Ipod! :)
Jodi: What is your favorite fuel during a race?
Katye: I find Chocolate Clif Shots to be my favorite as far as taste, texture, and affect. For some reason regular GU can uspet my stomach but I love Roctane! I usually alternate between these two on longer runs. I also like to pop a few sports beans when I need a little more substance in my stomach.
Jodi: What is your favorite post race snack?
Katye: TCBY. Love it and I feel a little better indulging in a low fat snack rather than some other ice cream (which I also love). But every once in a while I treat myself to a nice big breakfast after a long run. I love French Toast, Waffles, and Pancakes but only eat them on special occasions.
Jodi: Who do you admire most and why?
Katye: Running wise- Kara Goucher. Those who know me well know I am her ultimate stalker, I mean fan. Not only is she an amazing athlete, but she is so humble, down to earth, and honest. Her article in Runner's World about how she suffers from serious anxiety and self doubt was so relatable for me and I really admired how open she was! And lucky me, I've gotten to meet her 3 times and have two bibs signed by her! Non-running wise- my family. Hands down! :) 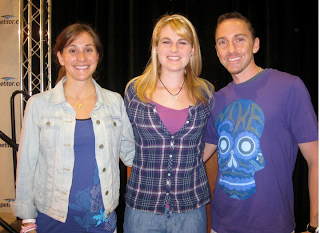 Katye with Kara and Adam Goucher in San Diego!! 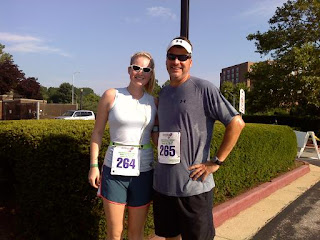 Katye and her dad running this year's Father's Day 5k!
Jodi: Do you have a favorite quote?
Katye: A few! "Hebrews 12:1 - Run the race set out for you with perseverance", "Runs end, Running doesn't". "There is more to life than running, and that's why we do it!" My own personal quote I developed for TNT - "We run because we can, for those who can't, so someday they will!"
And on a non-running front: "I believe in pink, I believe that laughing is the best calorie burner. I believe in kissing, kissing a lot. I believe in being strong when everything seems to be going wrong. I believe that happy girls are the prettiest girls. I believe that tomorrow is another day and I believe in miracles." ~Audrey Hepburn
Jodi: Finish this statement, when I run I feel _________.
Katye: Strong, Beautiful, Alive!
Jodi: What is your current goal?
Katye: Disney Challenge in January 2011. Boston marathon in April 2011, and to eventually raise $50K for charity through running! I'm a little over half way there!
Thank you for the opportuntiy to give you a Thumbs Up Katye! Best of luck achieving your goals!
Keep running, you're simply the best and Katye YOU inspire ME!!
Posted by Jodi H at 6:02 AM