Headed out for my second 5K in less than seven days. Going into it I really wanted to break 23:00. One of the girl's that ran last week was there today so I planned to pace off of her since she is generally in the low 23's. We were running 3rd and 4th female overall from the start of the race. Right before the first mile marker, I passed her and took the 3rd place female position. Since it was an out and back course, I was able to see her at the turn around and knew I had a significant lead. I just had to hang on and not completely blow up and I would be 3rd female overall. As I came around the corner to the finish line, my legs were burning and seemed to be quite angry with me but I managed to push through when I saw a 22:XX on the clock. I was thrilled to cross the line in 22:54 (unofficially...still waiting for results to be posted) and set a new PR and earn 3rd place female overall and 1st place in my age group. For the first time in a long time, I was SPENT at the finish as you can clearly see in this picture my niece took. The only reason I was smiling in it was because the finish line volunteers were confirming that I was in fact 3rd female overall and I had just realized that I had run a 7 second PR!! 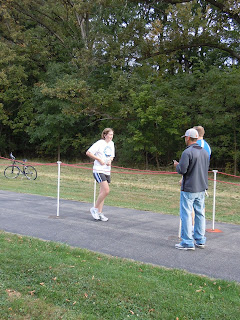 Right after this, I literally had to move to the side of the finish chute and bend over to catch my breath and compose myself at which point my sister-in-law became my angel when she was standing there with water in hand for me. After taking in a lot of water, I went back to the finish line to wait for my friend Nikki and her cousin, Mary Ann to come in. Nikki came in looking fantastic with a major PR! A short while after this,Mary Ann came in looking great. In fact, we had our picture taken as soon as she came through the chute. I think she is looking pretty good! 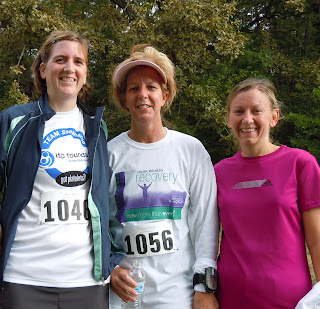 Me, Mary Ann, and Nikki

After we all talked for a few minutes, Nikki said since she knew she hadn't placed she was going to head home. Mary Ann and I stayed for the awards ceremony. I knew I would be receiving a medal for 1st female in my age division. My poor kids were cold and tired of waiting for the awards ceremony but they were troopers today! I happened to use technology to keep them occupied while we waited. Kaelynn went for my Ipod and Grant chose to play brick breaker on my blackberry. It worked to keep them happy until I was called up to receive my award! 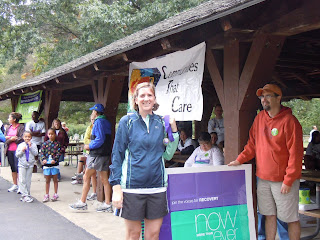 We decided to wait for them to announce Nikki and Mary Ann's age group awards to see how they did. Turns out Nikki got 1st in her age group!! Since she had already left, Kaelynn gladly walked up and received her award for her! 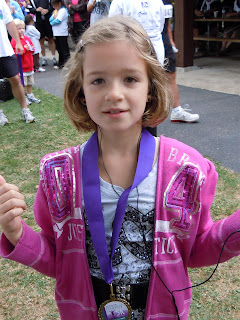 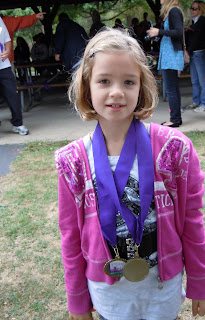 A few minutes passed after these photos and Mary Ann's age group was announced and she got 3rd place in her age group! Since Kaelynn started ice skating lessons today, we had to leave before they finished announcing all the age groups. As we were walking back to the car, I called Nikki to let her know that she had placed first in her age group and that I had her award.

All in all, it was a fantastic day of running! Lots of PR performances and age group awards and let's not forget my 3rd place female overall achievement! Yes, I am just a little excited about it!!

Keep running, you're simply the best, and you inspire me!!