A little over a week ago my friend Darlene asked if anyone would like to join her and run the Apple Festival 5K. I mentioned to her that I would like to see how I was feeling after pacing Jenn in the 1/2 marathon and then I would let her know. I was feeling great after pacing Jenn last Sunday so I shot an email to my running coach/training plan creator Joe (here) and asked him what his thoughts were on me running today's 5K as well as a 5K next Saturday. Currently my training plan calls for a pace run on Saturday, followed by a long run on Sunday. Joe was very honest with his response: "If it were me Jodi – I take those long runs VERY seriously. I would run long on Saturday (as early in the day as I could) – dial the pace down a little, maybe :20/mile slower than usual, ice bath or at least a really cool shower, hydrate, hydrate, hydrate and then race on Sunday. Same drill afterwards – if you feel good, jog a really slow recovery mile …. If you don’t and your legs feel spent, don’t sweat it and enjoy the post-race spread." As for next weekend's 5K, he basically suggested the same thing. The one bonus of next week is that the 5K falls on my pace run day which will allow me to complete my long run the following day. I took Joe's advice to heart and got out there at 5:30am yesterday for my 11 miler, came home and grabbed an ice bath, and then made sure to hydrate well throughout the day. I felt pretty good when I woke up this morning. A little bit of tightness in the legs but I was able to shake it out during a short warm up with Darlene. 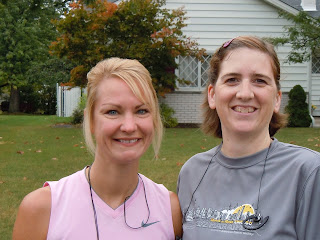 Darlene and I before our warm up and race
I started the race out strong with a 7:14 first mile split. I knew the large hill would be coming between mile one and two so I tried to conserve some energy. I was able to climb up the hill without too much problem...yes, I am admitting that hill repeats are beneficial! For most of the race I was playing leap frog with "red sports bra" girl. The course was an out and back and sometime around mile two "red sports bra" girl's friend shouted out "get her". I of course knew she was referring to me because I had taken the lead in our leap frog game. Between mile two and the finish, "red sports bra" girl took back the lead. As I was coming around the corner toward the finish I set my eyes on her and ran my heart out to pass her at the end. Funny thing is I didn't realize I had also passed Darlene at this point until she yelled out "go Jodi". I crossed the line in 23:18 right before "red sports bra" girl. She thanked me for pushing her out there (she set a good 2 minute PR today). Always a great feeling to help a fellow runner out! I walked over and dropped my 36th overall place card in the 35-39 age group bucket. I noticed right away that I was first. Fast forward to Darlene and I running a cool down mile and the age group buckets got knocked over by a gust of wind and the cards went flying. I didn't think anything of it until we were at the awards ceremony and they announced the top 3 in my age group and my name wasn't announced at all. Imagine my surprise when I realized I had seen the girl they gave first place to finishing her race while Darlene and I were doing our cool down. I had also seen the girls they gave second and third to finishing their races as well. Darlene and I went and talked to the guy in charge. I explained the situation. Yep, I was 36th overall and they gave first place in my age group to the 78th finisher overall (oops, I would say we had a bit of a problem there). He got all of my information and will be re-checking all of the place cards, updating and correcting the information and mailing me my first place age group award. Darlene and I were both bummed out that we didn't have a picture with me and my medal. Fortunately, Darlene was thinking on her feet and realized she had also placed first in her age group, yeah Darlene, so she let me "borrow" her medal for the photo! 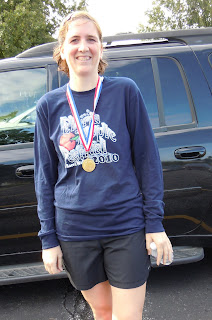 Me with "my" first place age group finish medal
While I didn't run a PR today (my PR is 23:01 on a pancake flat course during marathon training back in March), I am very pleased with how I did. I was amazed how good my legs felt today after running an 11 miler yesterday at 9:02 pace. I do believe I am getting stronger by the day! Looking forward to seeing what I can do at the Detroit 1/2!!
Keep running, you're simply the best, and you inspire me!!
Posted by Jodi H at 12:59 PM