Once again the kids and I headed to PA for the weekend. We spent Friday with family and friends enjoying the beautiful weather and having some pizza. Saturday afternoon I left the kiddos with my mom and stepdad and I headed to Cuz Michele's in Pittsburgh. After I got to her place we headed to the Convention Center to pick up our race packets. The expo was packed. Since I was running for a charity my packet pickup was in a different location than Michele's and I didn't have to wait in line at all. After I got my packet I went over to where Michele was standing and got in line with her. A few minutes later I realized I knew the girl in the line next to us. We grew up in the same area and we ran cross country together and against each other. After we collected all of our goodies we headed back to Michele's and watched some of the Kentucky Derby and made dinner. This time Michele made the same lemon caper chicken dish we had before our 22.2 miler and I made asparagus linguine. We also enjoyed salad with our dinner. After our delicious dinner we went and rented a movie. We watched Julie and Julia. It was a really cute movie. We headed to bed around 10:00 and hoped that we would wake up to dry weather. It wasn't raining when we woke up but the forecast was predicting rain between 8 and 9 AM. Michele and I ate our breakfast, got ready, and headed to the race. Michele had planned to park in a certain parking garage and we were shocked when we got there and the lot was closed. We spent the next 40 minutes trying to figure out where we were going to park...all of the roads were closing. Michele got out of the car and did a great job of negotiating (I think she may have even cried or at least pretended to cry) with the local city worker and he escorted us to Station Square where we finally parked around 7:15. The race started at 7:30 and we still had to get across the bridge to the starting area. Can you say stressed out much? We ended up running most of it and we literally got to the start line as the announcer said runners set, go. The start line was absolutely crowded and we had to do A LOT of zig zagging to get going. After about a half a mile or a mile it started pouring and it continued to rain the rest of the race. Cuz and I were running well together. Around mile 5 Cuz asked how I was doing and I mentioned that I was feeling a little tired. At this point we made a plan in regards to where we were going to meet if we go separated from each other. Shortly after this, I was no longer able to keep up with Cuz. I was experiencing awful stomach cramps. I think they were a result of drinking Gatorade on the course. I never drink sports drinks in training, only water. Yes, I know...never try something new on race day. Unfortunately, I was really in need of a drink and Gatorade was the first thing that was handed to me over the first several miles of the race. Around mile 8 I had to succumb to the stomach cramps and visit the porta potty. Without going into detail, my pace for that mile was 12 minutes. I continued to deal with the stomach pains for the remainder of the race. All things considered my time wasn't as bad as I thought it was going to be. I crossed the line in 2:06:41. I did learn a valuable lesson today...steer clear of the sports drinks on marathon day. At least it happened to me today and not two weeks from today during my first full marathon.
Cuz and I had agreed to meet at the St. Jude's tent since I was running for them. While on the subject of St. Jude's I wanted to mention that I did raise $150.00 in memory of Sophie Quayle. I went to the tent at the finish line and realized that she was probably at the start line tent and tried to make my way over to that intersection however I was redirected by the police because a bomb had been found on the marathon course and the runners were being re-routed to the finish. At this point, I think I had been looking for Michele for over an hour. Once we finally reconnected I felt horrible because she was sure I had gotten injured. In fact she even asked at the medical tent. I felt so bad and I apologized to her several times and I will apologize again as I know she will read this blog...SORRY CUZ, I LOVE YOU!! Once we reconnected we walked back to the car and headed back to Michele's to pay a visit to our friend, the ice bath.
RACE PICTURES:
My post race medal photo 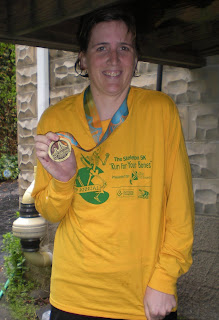 Me wrapped up shivering 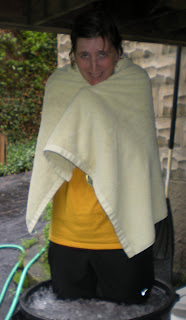 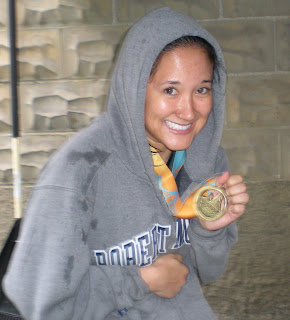 Michele chilling in the ice bath 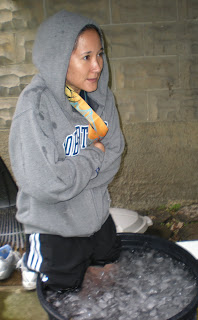 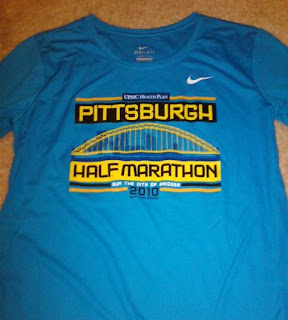 After the ice bath we had some lunch and then we exchanged our standard goodbye hug and said see you in two weeks when we toe the line at the Cleveland Marathon.
Keep running, you're simply the best, and you inspire me!!