Today was the River Run 1/2 Marathon. My job today was to pace Jenn (here) to a 2:15 finish in her first official 1/2 marathon. We arrived at the local high school around 6:30am to be shuttled to the start line. Marilyn, Nikki, and I had already boarded the bus so I sent Jenn a text message letting her know that we were on the first bus in line. She promptly responded and let me know she had just gotten to the high school and she would be boarding the bus in a few minutes. Once Jenn got on the bus she told me that she had put her pins for her race bib in her car and couldn't find them. She then said she hoped they had pins at the start line. Of course I did what any good pacer would do and took two pins off of my bib and gave them to her. It worked just fine...crisis averted! The bus ride wasn't very pleasant. It seemed to take forever to get to the start line. We finally arrived at the start line and we immediately went and got in the porta-potty line. While we were waiting our turn, I snapped Jenn's before picture. As you can see she was all smiles! 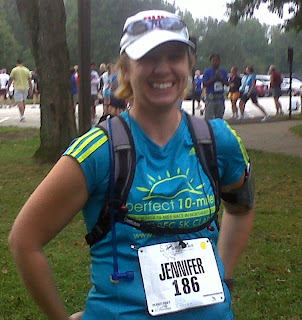 After the mini photo session I called Julie (a fellow dailymiler) to let her know that we were waiting in line to use the restrooms. She didn't answer her phone because she and Bill (her brother) were out doing a little 7 mile run before the 1/2 because both of their training plans called for a 20 miler today. Once everyone was ready, we started walking to the starting line and Julie called me back. We finally met up and of course had to get a picture of the ladies for dailymile! Right as this picture was taken, Bill yelled at me for not including him in the picture! 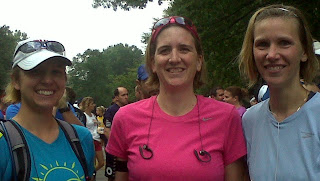 No worries, he got in the next picture!! 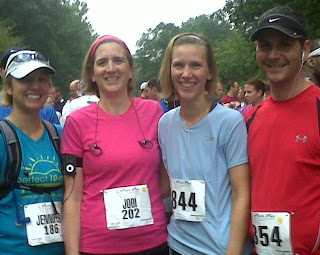 Julie was planning to run with Jenn and I so she didn't push herself to hard. Afterall, she is running the Columbus Marathon in October and this was a training run. Jenn and I discussed her goal for the day once more. She said she would like to run 2:15-2:20. A few moments later we were off. Jenn was moving along nicely. In fact, I mentioned to her that she might want to slow the pace just a little bit as she was exceeding her goal pace within the first 1/2 mile. I asked her how she was feeling and she said great so we went with it. I was able to get several action photos of Jenn today. I was happy that I didn't trip over my own two feet while doing it! 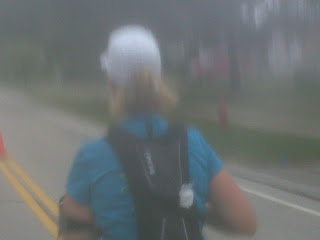 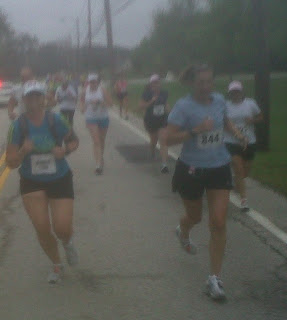 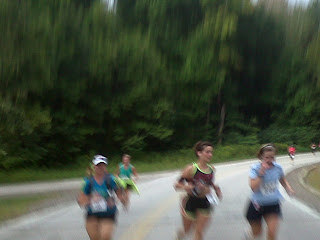 Jenn and Julie still doing great
Jenn had started her music at the beginning of the race but every so often she would take her ear bud out and want to talk. I was more than happy to oblige! In fact, I ended up taking my ear buds completely out around mile 8 because they were driving me crazy! Jenn was running strong and took her first Gu around mile 3, I believe. Once she finished it I put my hand out for her wrapper. She kind of chuckled and said "okay then". I told her not to worry about anything as I was just doing my job! I made sure to watch for any uneven ground and let Jenn know ahead of time that we were approaching it. I believe around this time a gopher crossed right in front of us. It was quite comical. I think it was in shock due to the number of people near it. It pretty much froze in the middle of the road for a second and then went on its merry way. Funny thing is, Jenn had to point the gopher out to me! I kept encourage Jenn and telling her she was doing fantastic! Although it was a net downhill course, there were a few slight uphills. We would slow down a bit before the climb and then tackle the hills like it was our job! I kept glancing down at my watch and we would be running under a 10 minute mile and I would just keep thinking to myself, we have this in the bag. She is going to crush her goal! When Jenn took her next gel she successfully put the wrapper in her bag without breaking stride! At mile 10 I mentioned to Jenn that I knew exactly where we needed to be at mile 10 for her to achieve her 2:15 goal and I said, I won't tell you where we need to be but what I will tell you is that we are ahead of schedule and you are doing fantastic. Jenn was fine with that! Once we hit mile 10 I asked Jenn if she wanted to run a 5K and she said sure why not! Shortly after this Jenn asked if we could slow the pace a little so that she would have a kick at the end. I told her it was her call and we would do absolutely anything she wanted to do! I think around mile 11 or so we passed two of Jenn's friends who were walking the 1/2 marathon. They cheered her on like crazy and told her how great she looked! I am pretty sure that gave Jenn a boost of energy because she picked up the pace again! At this point, I told Jenn we can do anything for twenty minutes and she agreed! I also told her at this point that she was stronger than she thought she was and she replied with aren't we all! Great attitude! Gotta love that! Once we were just past mile 12 I said we have a mile to go and you will be a 1/2 marathoner! At this point, we needed to run a 14 minute mile to come in at Jenn's goal of 2:15. I told her we would definitely be making her goal and she said unless I walk. I reminded her that she was strong and she could do it. Mile 12 did seem quite long. In fact other runners were commenting on it! I said it's that .1 on the end that makes it seem long! As we rounded the corner to the finish line I told Jenn that I could see the clock and we were golden. I kept encouraging her to pick it up. I told her that she could outsprint me and she said no I can't. In the end...Jenn outsprint me to that finish line! It may have only been by one leg stride but she did it and she was now a 1/2 marathoner in an amazing time of:
2:06:56!!
I would say Jenn crushed her goal!! In fact, her family missed her crossing the finish line because she had told them she was hoping to cross around 2:15. Jenn was handed her medal as we hugged (I had to turn around and grab mine because I missed the person handing them out) and I told her how proud of her I was. I told her I knew she could do it and she was now officially a 1/2 marathoner! I am so proud of Jenn for being strong today! She could have given up but she never did! She just kept going and made herself and her family proud! Jenn was thrilled to see her family at the finish line! Could her boys be any cuter?!?! 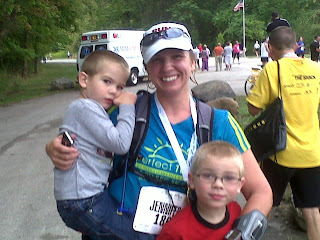 Jenn and her boys at the finish 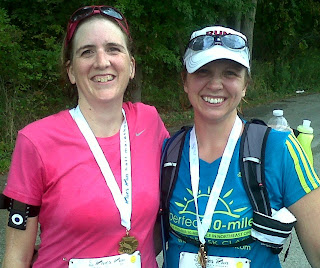 Jenn and I at the finish! Happy and proud!
After a few pictures, we watched the other runners come in! Julie came in shortly after us! She was a rock star out there today as well. Who does a 7 mile warm-up before a 1/2 marathon?!?! 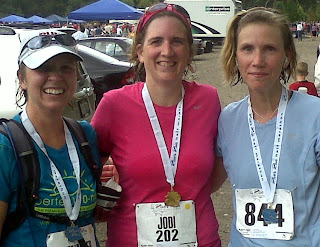 Jenn, Julie, and I at the finish
Shortly after Julie crossed, Nikki and Marilyn came through both looking very strong! See, Nikki and Marilyn are part of the group of us that are attempting to run a 1/2 marathon in all 50 states. We were missing Deb today. She was really sick and decided around midnight last night to back out so she wouldn't make herself worse. While it was the right decision for her, we still missed her out there today! 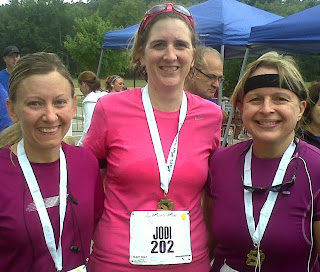 Nikki, Marilyn, and I at the finish
After we grabbed some food and water, Jenn and I exchanged hugs and I once again told her how proud of her I was! Nikki, Marilyn, and I decided that we would walk back to the local high school instead of taking the shuttle bus. About a mile into the walk we were having second thoughts about our decision to walk. I am pretty sure we walked a good 2 plus miles. Oh well, it was good for us to stretch the muscles out. On our ride home Nikki mentioned that she was going to do an "ice bath" in her backyard pool and offered the option to Marilyn and I. Marilyn opted out but I agreed to partake. It was quite cold when we got in the water, in fact I had to put on a windbreaker to keep my upper body warm. Ten minutes later it was over with! I think we will be glad we did it when we are less sore tomorrow!! 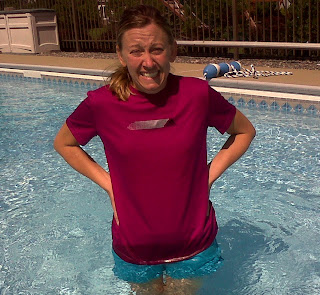 Nikki in the "ice bath"
Pacing Jenn today was an amazing experience! It was truly an honor and a privilege to get her across that line today! I need to take a moment to thank Mel (here) who gave me lots of advice on pacing as she paced Jill (here) to a PR 1/2 marathon last weekend! All of your tips were spot on Mel!!
Keep running, you're simply the best, and you inspire me!!
Posted by Jodi H at 2:12 PM