This morning I ran the Girls With Sole 5k. It would be my first "race" back since my marathon attempt. My neighbor Brenda stopped by and picked me up and we headed to Rocky River for the race. Once there we met up with my sorority sister, Jenn and another neighbor, Laura. We made our way to the restrooms and then had some pictures taken before the race started. 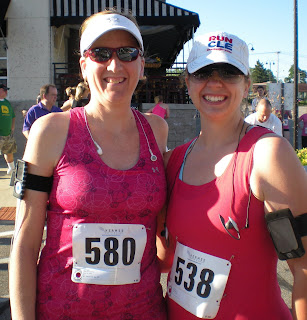 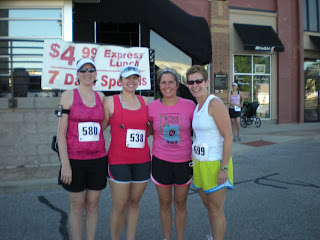 Me, Jenn, Laura, and Brenda
With pictures taken and the Star Spangled Banner sang (very brilliantly by a young girl I might add), we headed to the start line. I have to admit I was a bit nervous since this was the first time I was pushing in a race since the marathon in May and it was HOT today! My thoughts immediately went to the risk of dehyration. I just told myself that I would make sure to grab two cups at the water stop. One to drink and one to dump on me to cool myself off. My awesome friends knew I was a bit stressed out about the race and told me to just relax and have fun out there and then the bell rang and the race started. I went out a bit too fast. My first mile was a 7:42 and it was really getting hot at this point. I made a point to grab those two cups of water and they were very helpful. I also made it a point to run through the sprinklers that happend to be on in the neighborhoods. The next thing I knew I was at mile 2 with a split of 8:00. From mile two on I just focused on the people in front of me and tried to pass as many people as I could. After passing several people, I rounded the corner for the uphill finish. I even said to the volunteer that was directing us that this uphill finish was so wrong. I guess I was doing okay if I was able to tell him that! Once I hit the three mile mark I noticed a guy in front of me and gave it my all to catch him and beat him to the finish. The woman that put on the race yelled out to me to not let him beat me. In the end, it was a sprint to the finish between us. He put his hand out for a high five and I returned that high five right before I crossed the finish line BEFORE him in an unofficial time of 24:48. Once we both caught our breath he told me it was all my fault that he had to sprint. I laughed and said good job and then I went back out on the course to cheer on my girls! I walked back out to the three mile marker and I saw Jenn coming and I knew she was under her goal time. I ran up to her and told her the clock was still under 28:00 and she could do it. I took off running with her and helped her navigate through people and made sure she knew there was a speed bump right before the finish line so she wouldn't trip. She gave it her all and crossed that line with an unofficial time of 27:51, an awesome PR for her! Jenn and I walked together and grabbed some water and then went back to the finish line to cheer the other girls in. Laura finished around 31:00 with a huge smile on her face! Brenda came in shortly afterwards. She had a rough go of it out there today. See, she is a spinning instructor and she taught class yesterday and didn't hold back so her legs weren't real happy with her! We all went and grabbed some food after this and then Brenda and I decided to head home. Jenn was going to stay a little longer to cool down before she went home. Now, back to my finish time of 24:48. It was not a PR by far so imagine my surprise when I got a post from Jenn on Facebook informing me that I won 3rd place in my age group. I never place in my age group so I figured I had no reason to stay for the awards ceremony. A friend of mine used to work for the company that sponsored the race and he told me to contact them through their website so I sent them an email to see if they would mail the award or if I would be able to pick it up. I really want the award especially after my Cleveland DNF. I feel like this was my "comeback" race and I earned that medal!! Maybe I am weird and shouldn't care but I can't help it. This is my first age group award since I started running again in February 2009. I am really hoping to hear back from them sometime tomorrow. In the end, I am very pleased with the race I ran today. I do believe I have found my confidence in my running ability again!
Keep running, you're simply the best, and you inspire me!!
Posted by Jodi H at 9:59 PM