Monday afternoon Jenn and I were text messaging and it went something like this:

The text messages continued into the evening and before 8 PM on Monday night we were signed up to run our first 30K.

I had offered my guest room to Jenn on Saturday night since the race took place close to my house and she took me up on the offer. Once Jenn got here we headed to dinner and had pizza and beer. She was a cheap date! LOL. Once we got back from dinner we looked at some running things online and then headed to bed. We woke up to this lovely sight this morning... 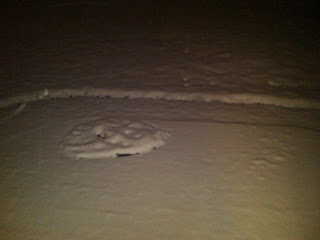 Yep, sure enough the weather forecast had been accurate and we would be running 18.4 miles in the snow! We got ready, had some breakfast and headed out. We stayed inside the college where it was nice and warm until it was time for the race to start! 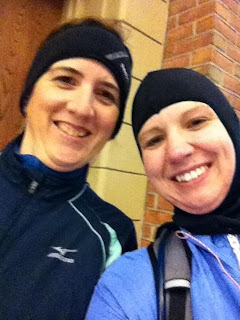 Since neither Jenn or I had ever run a 30K we knew we would have guaranteed PR's today!! The course took us on two 9.2 loops around town. We were having a great time talking during the first loop and managed to hold between 10:15-10:30 mile pace (I'm pretty sure Jenn had no idea this was the case). As we were approaching the end of the first loop, Jenn mentioned she had to pee. At the exact moment she said that, I said damn it. It was hilarious because Jenn thought I was annoyed that she had to pee. So much so that she told me I could keep running but she had to stop and pee. I couldn't stop laughing when I told her I had to pee too and the damn it was because I had just stepped in a puddle and now my shoes were wet! It was too funny! When we headed back out for our second loop I could tell Jenn was starting to feel it. Right around mile 11 she slowed to a walk and told me she felt like she was going to pass out (what is it with me and people almost passing out. Dave last weekend and Jenn today). She took in a gel and seemed to be feeling a little better and then it happened again a little further down the road. At this point she told me she felt like she may puke. I told her to go ahead and puke and we would move on. LOL. In the end she didn't puke, but I did have to send Negative Nancy packing a few times during the course of the final 7 miles! During the final two miles there was another runner not far ahead of us and Jenn told me to go try and catch her. I told Jenn no. There was no possible way I would be leaving Jenn on the course. We were in this together until the finish which we reached in 3 hours and 18 minutes (time includes potty break). For the first time ever I finished last in a race but ended up getting first in my age group. I guess it pays to be old since I was the only one in my age group today! After we left the race we stopped to grab hot chocolate to drink while we took our "ice" bath.

Once we got back to my house we headed outside to use the lovely white stuff to ice our legs. As we sat down Jenn asked me what I had this for. 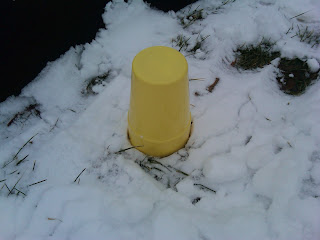 I told her I would be using it to scoop snow on my legs. As you can see it worked perfectly!! 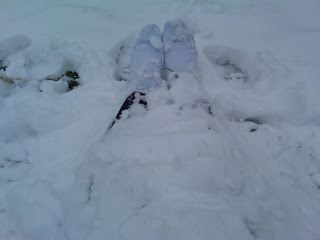 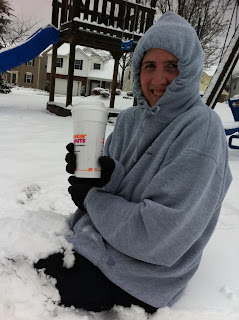 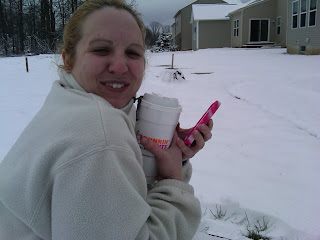 All in all we had a great run with lots of laughs and we were both still smiling when we crossed the finish line and in the end that is what matters!
Keep running, you're simply the best, and you inspire me!!
Posted by Jodi H at 4:56 PM