These week's spotlight is on Aj of Queer Vegan Runner (here). Once you have read Aj's interview head on over to her blog and say hello!


Jodi: How long have you been running?
Aj: I've been running on-and-off since high school. In Fall 2008 I started running with my partner in an effort to lose some weight and be more healthy. With the exception of a few injuries and a few bouts of loss of motivation, I've been running regularly since then.

Jodi: Why did you start running?
Aj: I started running in high school in a failed attempt to join the cross country team with a friend to get out of gym class. Since then I've kept running because it's a very effective exercise and I love that I can do it nearly anywhere. Recently I've truly begun to love it!

Jodi: How many years have you been racing?
Aj: Our first race was April 2009 - it was a 5K and we crossed the finish line holding each other's hands. Since then that's become a tradition. 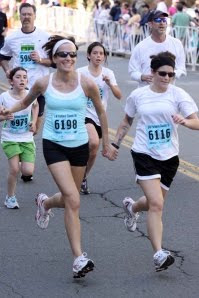 Jodi: What is your favorite distance to race and why?
Aj: I really love half marathons, that's a distance I wouldn't normally run (yet) on a regular training run, so it feels like I'm doing something extra special. So much can happen in 13.1 miles, I never know what to expect. 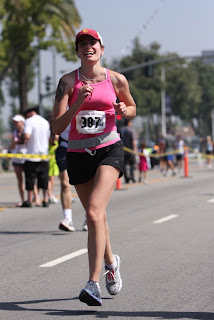 Jodi: What is your favorite race memory?
Aj: Crossing the finish line at our first half marathon - OC Half in May 2010. I was nearly in tears at what we had accomplished. I really felt like I was beginning to learn something about myself from pushing myself to these achievements. It was a beautiful course and our only goal had been to run and have fun - both were completely accomplished! 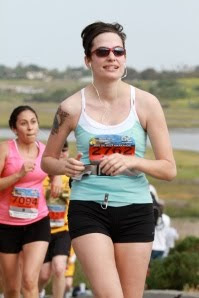 Jodi: What is your least favorite race memory?
Aj: There was a big hill at mile 11 in the LA RnR Half in October 2010. It was our third half and I had pushed myself very hard in training for a very specific time goal. I knew I was feeling a little injured going into the race and we went out too hard too soon, ahead of our pace group for the first 8 miles. Then I hit a wall for the first time in racing. And I walked for the first time in racing. Around mile 11 there was a steep hill and we were walking up it and I wondered for the first time if I would DNF. I told my partner to run ahead without me and instantly regretted it. I hated the thought of having to push to the finish without her. Luckily, she knows me well and knew that running ahead would motivate me to push myself and catch up with her. It did! I ran after her, calling her name. I had never experienced that kind of physical and emotional pain. I wish my goals had been more realistic and more about having fun and less about the time.

Jodi: What is your proudest running moment to date?
Aj: Since running our first 5K in April 2009, we have decided to try to PR a 5K every year. We had a goal set for this year and last night on my first run after a week off (back injury), I beat that goal. I knew I could do it and I was so proud that I was able to push myself! For so long running was something I plodded through just to get the exercise and miles in. Recently, I've turned a corner and I'm just loving running for the sake of running and pushing myself rather than plodding along!

Jodi: What one item do you absolutely have to have with you on a training run?
Aj: Not much! I've done runs without my Garmin, without music, etc just to mix things up. I guess my keys would be something I need to have! I hate carrying things so I wear a belt just to stick my keys in. It's really a glorified fanny pak!

Jodi: What is your favorite fuel during a race?
Aj: Good question - I haven't found a fuel that I love and that I think really works for me. I'm going to have to experiment more with that. I haven't tried Cliff Bloks yet and I think that will be next. I don't like Gus, yuck! The consistency just doesn't sit right with me.

Jodi: What is your favorite post race snack?
Aj: Yummy! I run to eat and eat to run! After a race, I love to indulge in Mac n' Cheeze. We use this veganized recipe (here) and call it "Death Row Mac n' Cheeze" because if I were on death row, that's what I would request for my last meal. Oh, and definitely a post-race beer to celebrate and indulge!

Jodi: Who do you admire most and why?
Aj: I really admire my partner. She is always encouraging me to push myself yet set realistic goals (if only I had listened to her about the LA RnR half!) She believe in me, sometimes more than I do. She's very dedicated to her health and training, but focuses more on the process and having fun than on the race, which is something I would like to learn.

Jodi: Do you have a favorite quote?
Aj: So many! But one that really resonates with me is "Just because you can't do everything, don't do nothing. Do something, do anything." - Colleen Patrick-Goudreau from Compassionate Cooks. She said that quote in reference to being vegan and trying to live a compassionate lifestyle, but I think it applies to so many situations. Just because we can't be perfect it does not mean we shouldn't try to do the best we can.

Jodi: What is your current goal?
Aj: In June I will begin training for my first marathon - the Detroit Free Press Marathon in October 2011. We run into Canada and back! It will be my first time running a full marathon and also my first time really racing alone since my partner will be running the half with her sister.

Jodi: Please feel free to add anything else you feel will help others lace up their shoes and get out there and run!!
Aj: You will probably hear that running is 90% mental and that is true. I didn't truly enjoy running until the past few months and I've realized that it was mostly me standing in my way, putting up barriers. However, that 10% that's physical is still crucial and sometimes it comes first. Sometimes you need to push yourself past the initial discomfort to see what you are made of and what you are capable of to really begin to think you can do it. Whatever "it" is. It's also important to define that "it" for yourself and to measure it against yourself. There will always be someone who runs further, faster, and more frequently than you. To the extent that's motivating, great. But if it feels like you're not a "real" runner because you're not doing what they're doing, focus back on yourself, your goals and how to measure success in your own terms.

Thanks again for the opportunity to give you a Thumbs Up Aj! Best of luck in your first marathon!

Keep running, you're simply the best, and Aj YOU inspire ME!!
Posted by Jodi H at 5:00 AM